The Battle Of Amsterdam – January 2022

Since 2017 the letters I have written to the city are countless.

They have always expressed my admiration, my love, and my eternal faith.

Some of them more personal, I never published them.

A “love confession letter” for a city I live in is an attempt to see the evolution of myself in it.

That was the aim of these short (often silly) texts.

A survey of feelings and conclusions about how much I have changed.

About how much the concept of “beauty” has the same criteria in me.

In these paragraphs, on the occasion of the tremendous Lockdown that The Netherlands has been experiencing since the beginning of December I will try to speak as honestly as I can.

The lies are over. 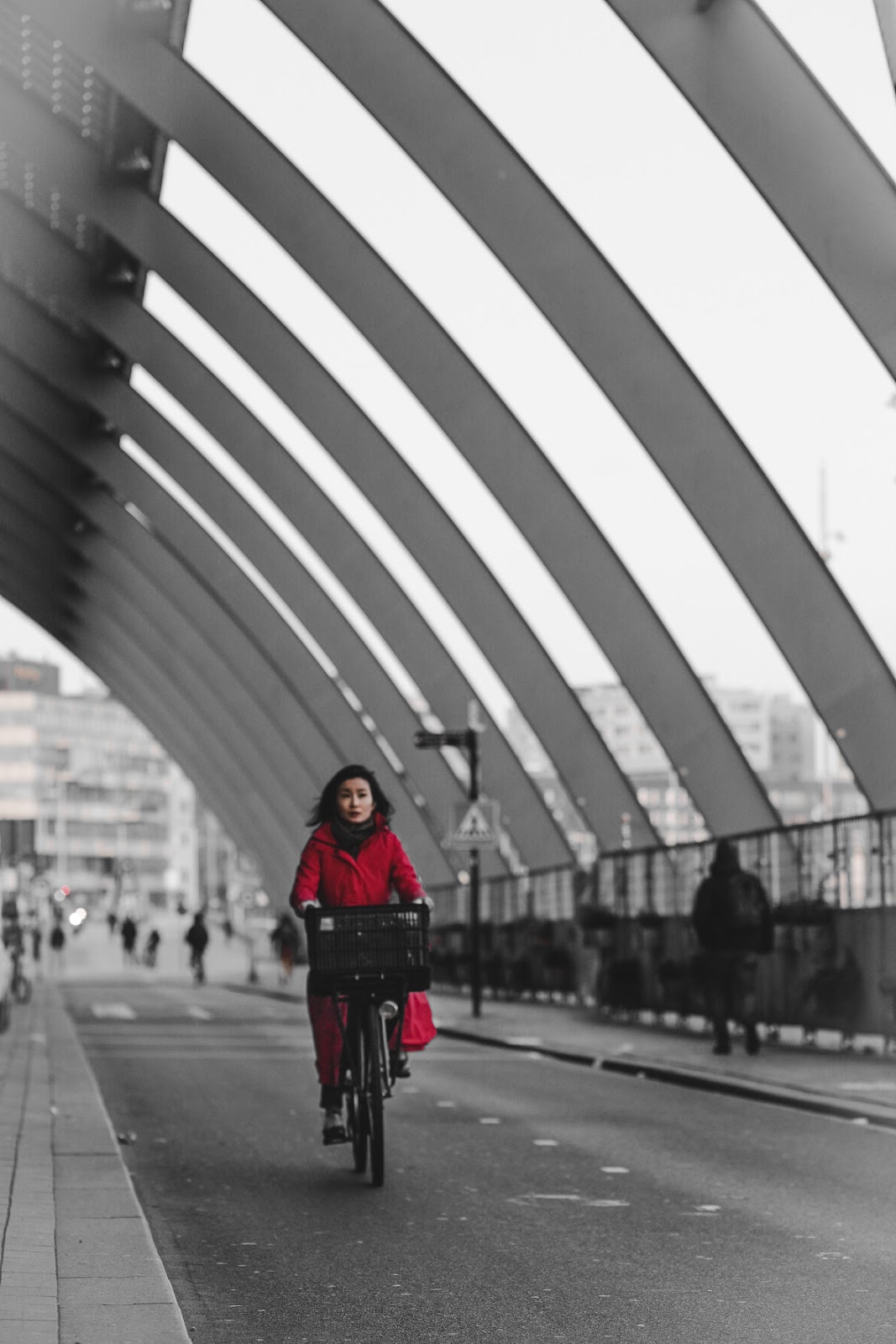 Oh you, my little beloved city, I cannot photograph and write about you, in the same way, I did two years ago.

The planet has collapsed and nothing is the same.

My relationship with you is no longer innocent but It is real.

I know well your dark secrets & you certainly know mine.

Last September in the city there was a mixture of absolute freedom.

A certainty that it was all over.

That amazing gift the Dutch have is to communicate their enthusiasm for even the most insignificant things.

A mixture of bravery and determination.

Of course, you let yourself be carried away by this feeling. You have no choice.

The tourists have returned en masse without anything having changed.

Wild parties started in the suburbs.

The cafés were full.

Protection as a word had almost become a mockery.

I realized that something might be wrong when at my annual check-up in a central hospital in Amsterdam at the end of October the two doctors examining me told me very cheerfully to…. take off the mask.

I began to feel even more insecure every time I heard the Dutch Prime Minister making statements.

Apologizing only with a sincere attitude is not a political stance. It is a cheap trick to impress the naive voters…

When just below his interviews I clicked on the translation to the angry comments of Dutch friends I was almost frightened.

(I thought that was a Greek privilege)

And so one day the Netherlands became the country with the most strict Lockdown of the European Union.

I found myself on Christmas Eve in the canals of the city riding my bike almost all alone.

The shops with Christmas vitrines were closed.

Queues outside cafes that reminded me of Soviet unity just before the break-up.

The mayor had managed to decorate the town but no one was really celebrating.

The citizens’ departure for Belgium, France and Germany was inevitable.

I was probably one of those who went against this abandonment.

It was the most melancholic but most meaningful holiday in recent years.

In the homes of the people I love, I felt warm and loving.

But especially at nights when the streets were deserted I could clearly see the resentment and frustration.

……As much as I am saddened by the sight of an empty city, I am relieved by the absence of tourists.

I look at the group of bicycles with plastic flowers that an artist has placed on the railings of the city canals.

I find them so aesthetically unacceptable.

So cheap. They fit in perfectly with the tacky sex shops, and the places selling one euro tourist items.

I pass outside the Anne Frank museum and right next door I notice another pancake shop from the same company. Countless such places with no character and zero quality.

Stop In the small harbor of Damrak.

Perhaps the most photographed spot in the city center.

There are no more girls changing fake haute couture clothes with their photographers, pushing each other on the garbage hills of the previous night.

The edges of wedding dresses have been rolled in ketchup-mustard papers and bottles of alcohol before the coveted wedding day.

Thankfully it will be a long time before they come back.

I am reminded again of the group of visitors to the Rijksmuseum who are piled up like sardines in a can in front of the Vermeer paintings.

They are nervous. They don’t have time to enjoy anything. Their guide is in a hurry because she wants to pick up the next group. The museum directors rub their hands when they see so many tickets being cut. Who cares about the real personal enjoyment of contact with art?

I am fantasizing… Vermeer’s milkmaid coming out of her frame and spilling all the milk on the museum stairs in protest.

The sardine tourists applaud her.

The directors and guides chain her and punish her for her insolence.

I arrive with my bike outside the studio on RTL Boulevard

on Lange Leidsedwarsstraat in the center of Amsterdam. I leave a rose at the spot where last July the famous brave journalist Peter R. de Vries was murdered by the cocaine mafia.

Oh yes, in this city where lovers walk comfortably hand in hand, drugs are a great unsolved mystery.

No one talks about them. No one is bothered.

Amsterdam is a city that washes them right out.

De Vries was attacked in a country with one of the highest levels of media freedom in the world.

If you think this only happens in the south of Italy, you are wrong.

An expensively dressed old couple with a heavy American accent passes in front of me.

They have taken their little blind dog for a walk.

The man is tired and all he would like is not to move from the TV screen and consent to play the electronic game online with his friends.

She walks ostentatiously making noise with her impressive heels. The wind is blowing hard and she is holding her hair with much anxiety.I suspect her thick blond hair is a wig.

The dog is pissing on the rose I left for De Vries.

They’re looking for the exit from a small alley.

They are almost lost.

Some expats ‘ll never be part of the city. 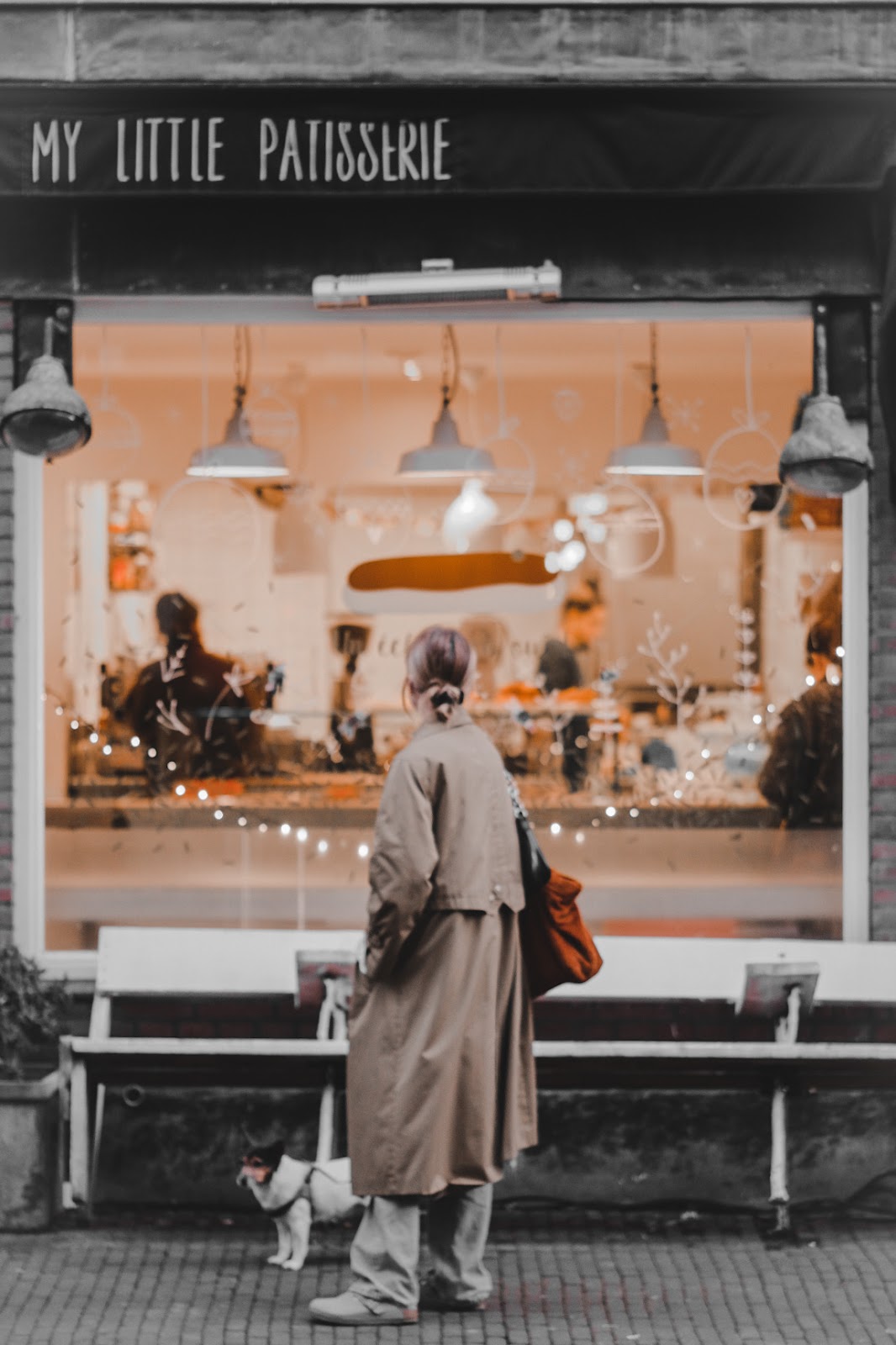 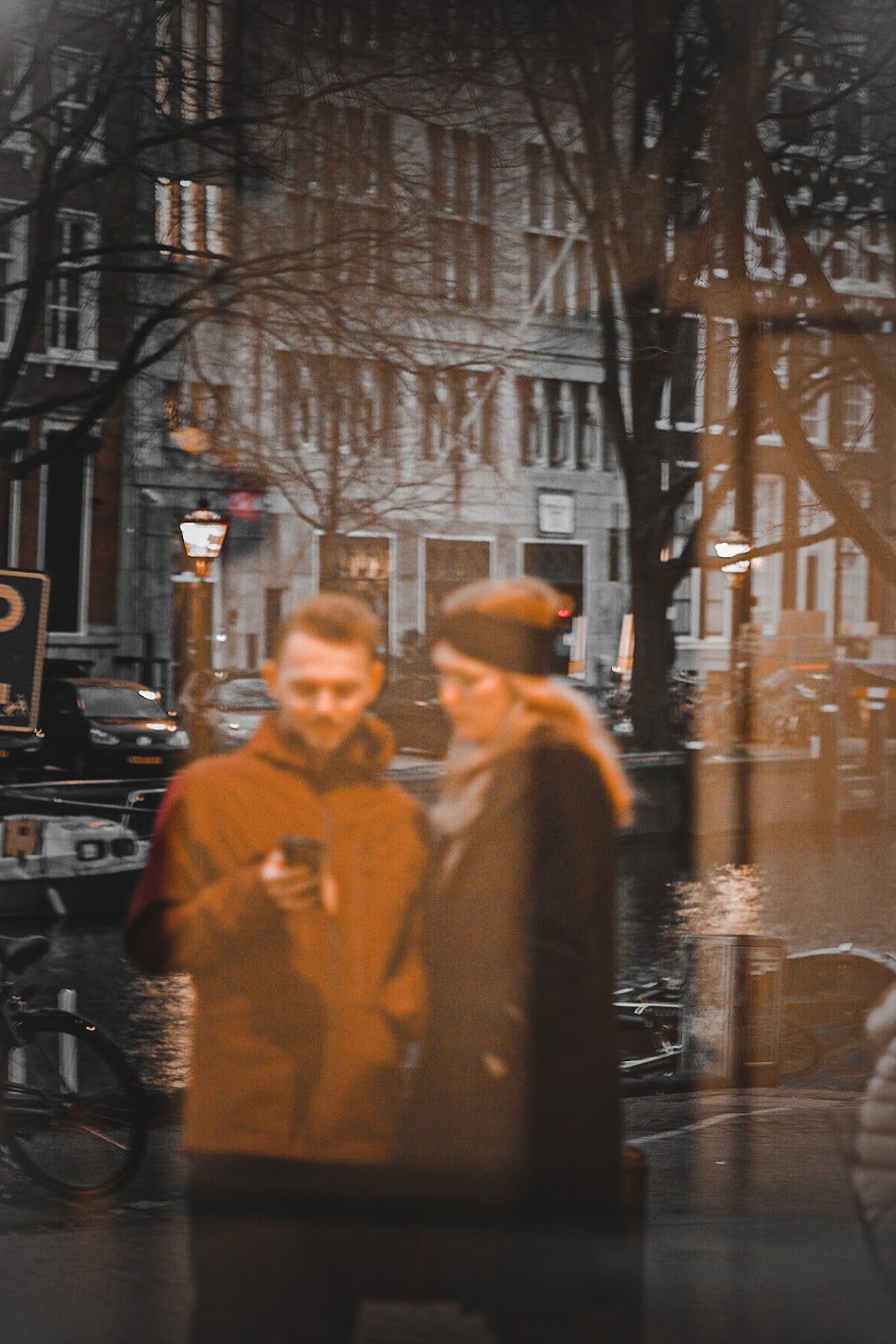 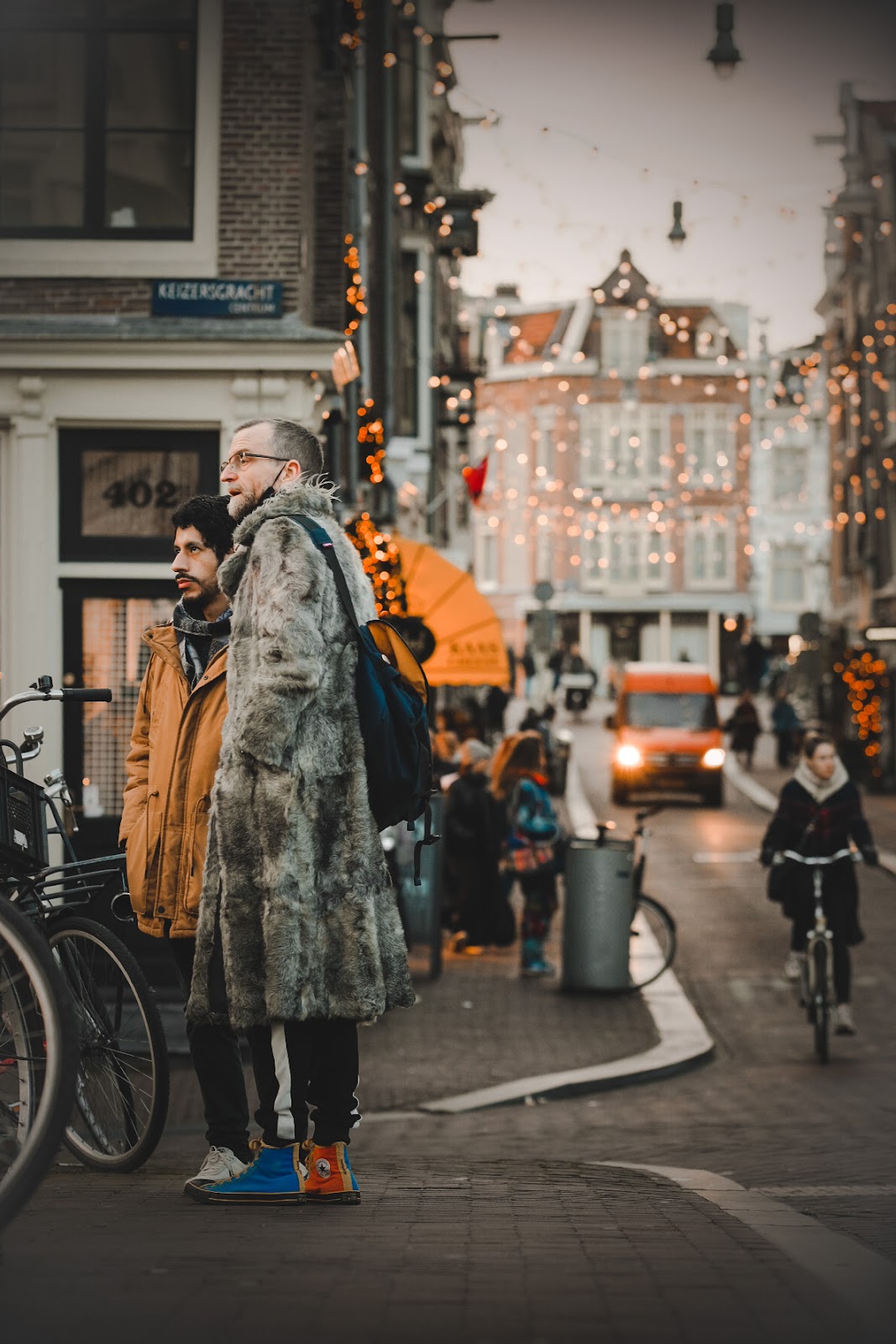 The large bouquet of the first tulips of 2022 that I have bought is not fresh.

By the time I get it home, it has almost wilted.

I’m angry that I was fooled. But who can I ask for my money back.

I order a takeaway lunch from my favorite vegan restaurant and it arrives cold and a somewhat small portion.

I’ve paid 20 euros and I am starving.

At the opposite window on the other side of Singel, a huge man is eating the biggest burger I’ve ever seen in my life. The view from his window must be magical. I watch him devour it in a hurry while he takes a second one out of a bag.

The illusion of success brings depression and bulimia.

I’m not talking about the official ones organized by the municipality.

I’m talking about the scary ones. The “Chinese Bombs” as they call them.

People (I still can’t understand why) are becoming obsessed with this sport. 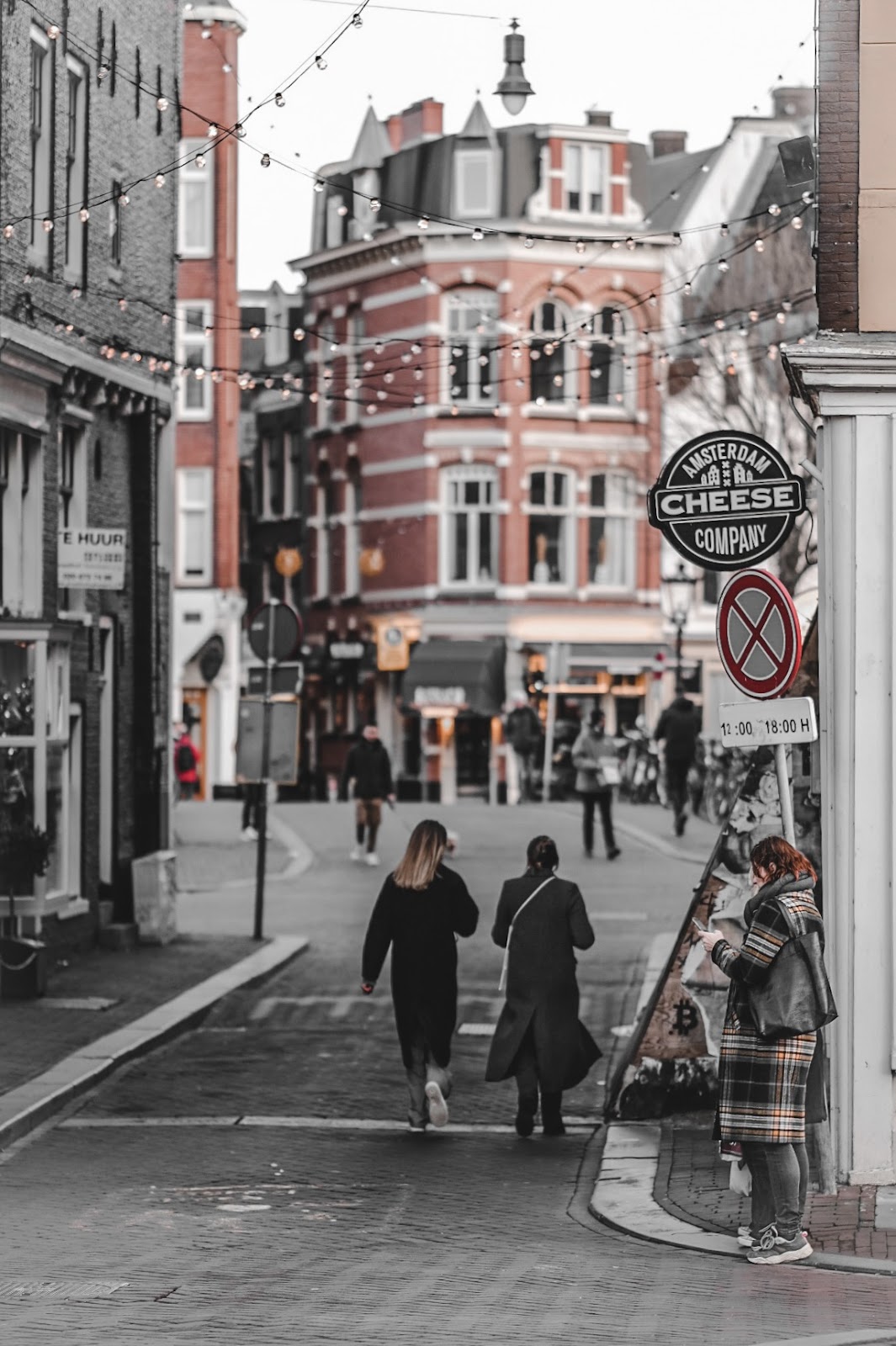 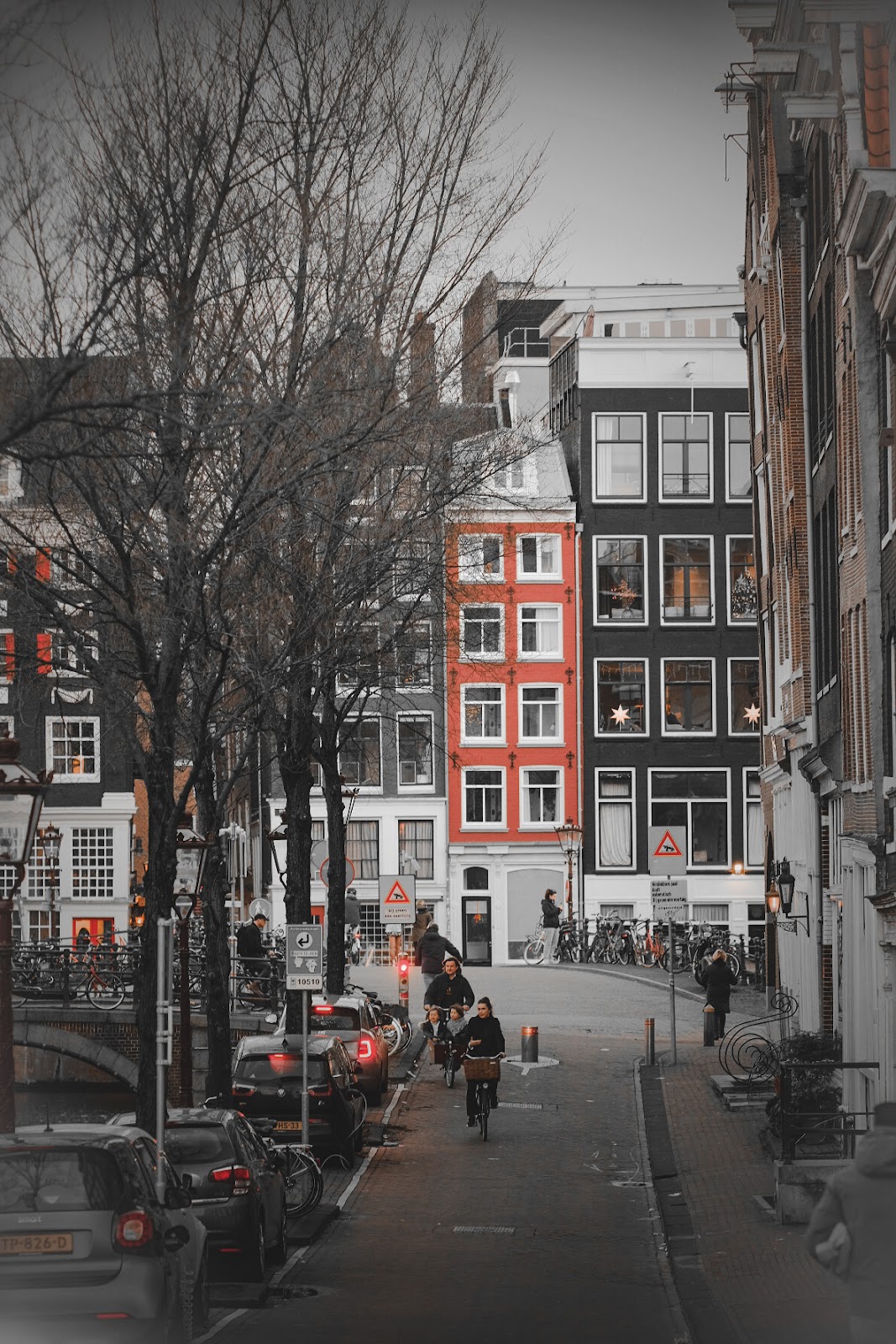 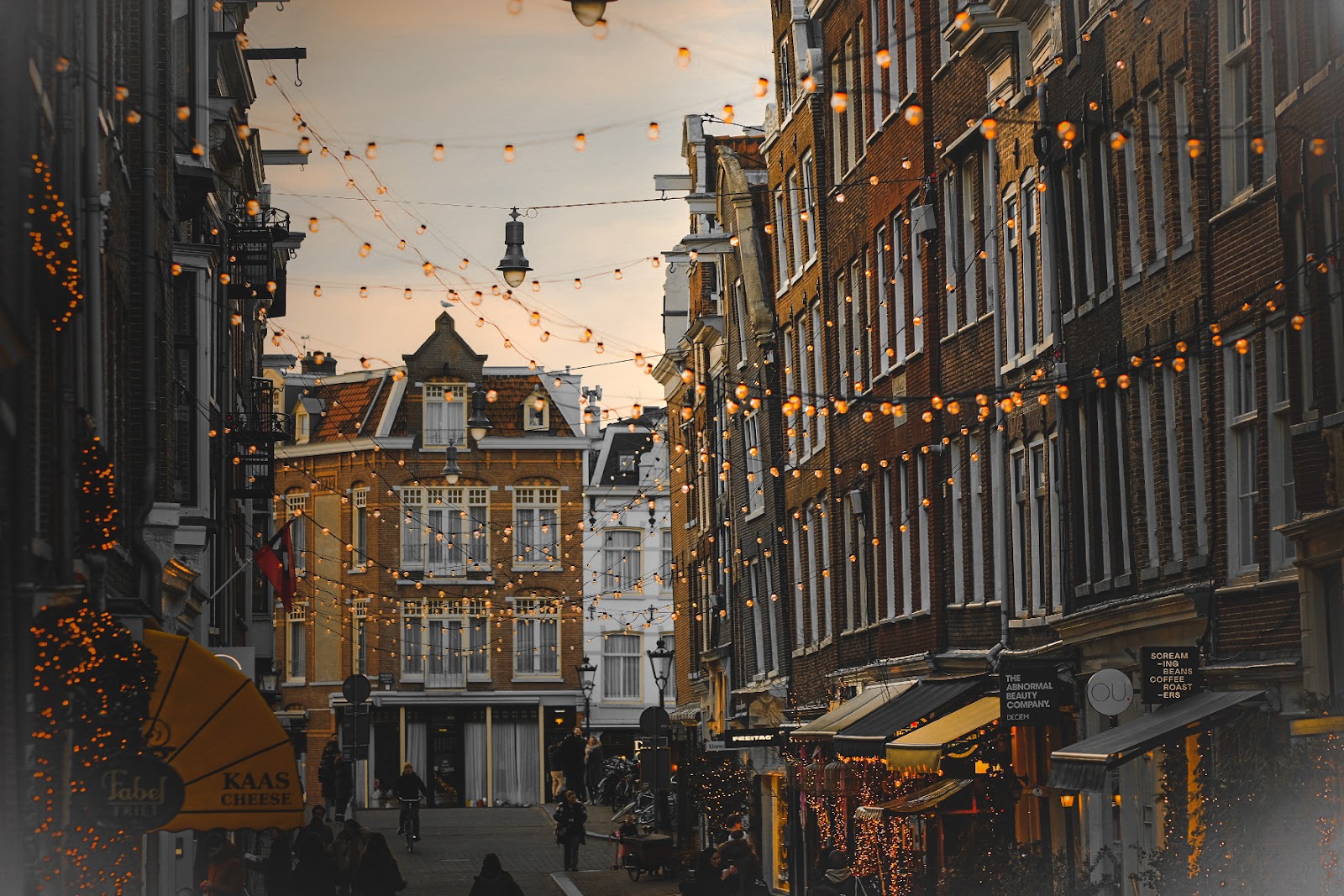 The dogs run into the arms of their owners, terrified.

Some cats will never come back.

The little birds in the trees flutter in the sky, upset. Many of them fall into the canals dead.

But worst of all… the hearts of children sheltered in the country by wars. The Heart will always bring back memories.

For those of us who have not experienced war, it’s scary anyway. I can’t imagine for the refugees.

The barbarity of this silly custom should have been stopped by now.

But the straight male need for superiority must be manifested.

The image of the Dutch loving mother and neighbor helping her little boys to light a harmless firecracker ‘as she herself says, shocks me.

Ι know dear friends, the photos do not match this revelation.

I’ve decided that I’ll talk about beauty with my camera. At least for now.

With my pen, I’ll talk about the darkest things. The things that are not always pleasant.

sorry if I upset you,

if I revealed some of your wounds.

if I’ve bared your hidden scars.

I want to tell you that I love you.

Mostly because you’re not perfect.