The Honey Dreamers Of Andros Island

This blog could not start with anything else but Greece. Of course not because I was born there, but because of the previous May, when I had one of the most beautiful travel experiences I have ever lived. The island of Andros is by far one of the most blessed regions of Mediterranean sea. When you find out that one of your favorite photographers is leaving New York for one week and is flying there, then you have no other choice. You leave rainy Amsterdam as well and run in order to meet her. @nicole_franzen in a retreat organized by the hotel @melisses.andros and in collaboration with @foxfodderfarm and @letitita_ann_clark was a huge challenge for me to organize this trip.

My favorite Surrealist Greek poet and psychoanalyst Andreas Empirikos calls Andros, Eden and while I was reaching my destination I realized he was right. A Cycladic island with crystal clear waters, wonderful vegetation, rare species of birds, hiking trails, stone bridges, monasteries, castles and the Chora (Chora in Greek is the capital of the Island) with classical houses, which resembles a boat, when someone is watching the view from the sea. Fortunately, the residents of the island develop tourism with moderation and caution so we can talk about a boat that sails in the sea with travelers who respect and love this island. 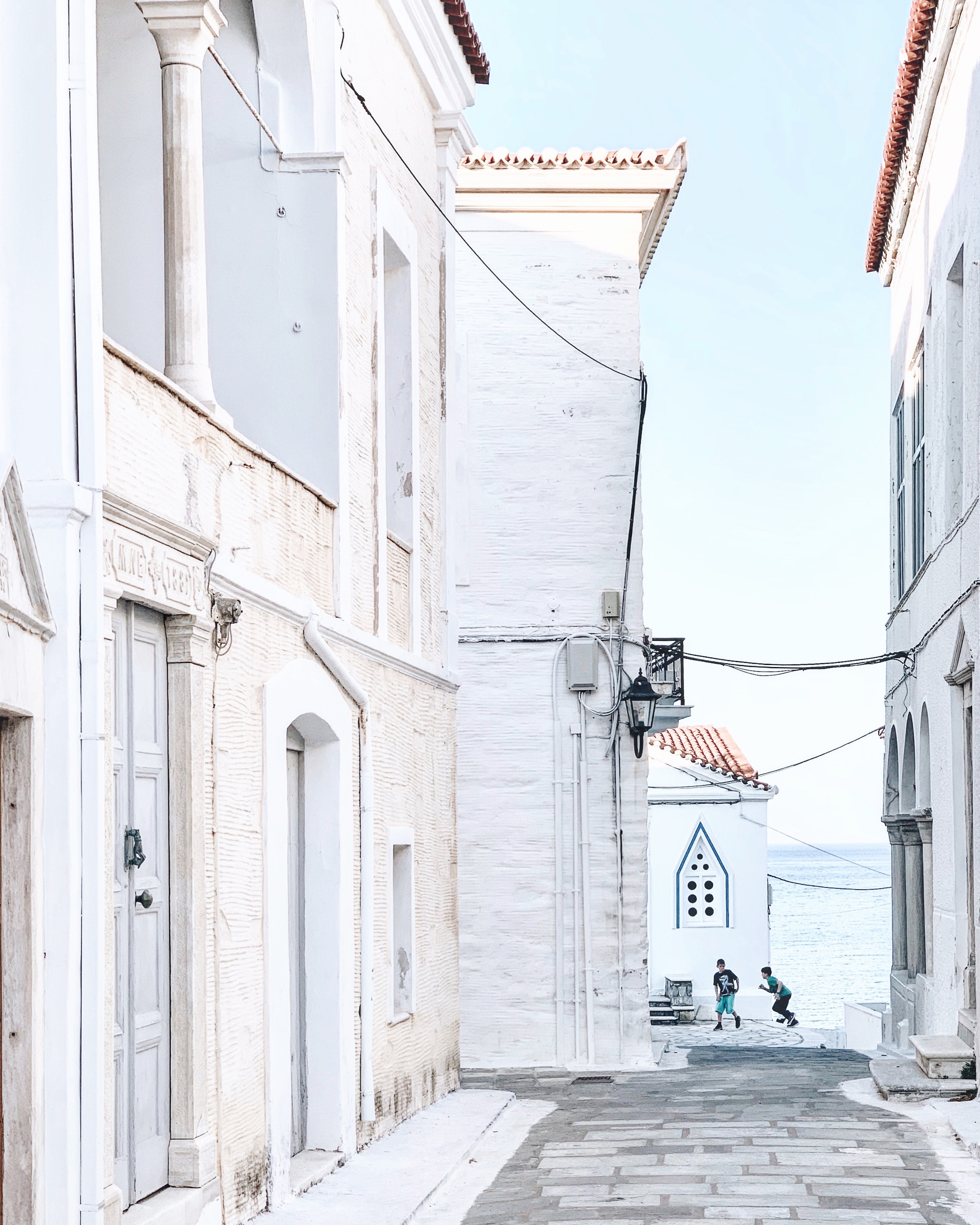 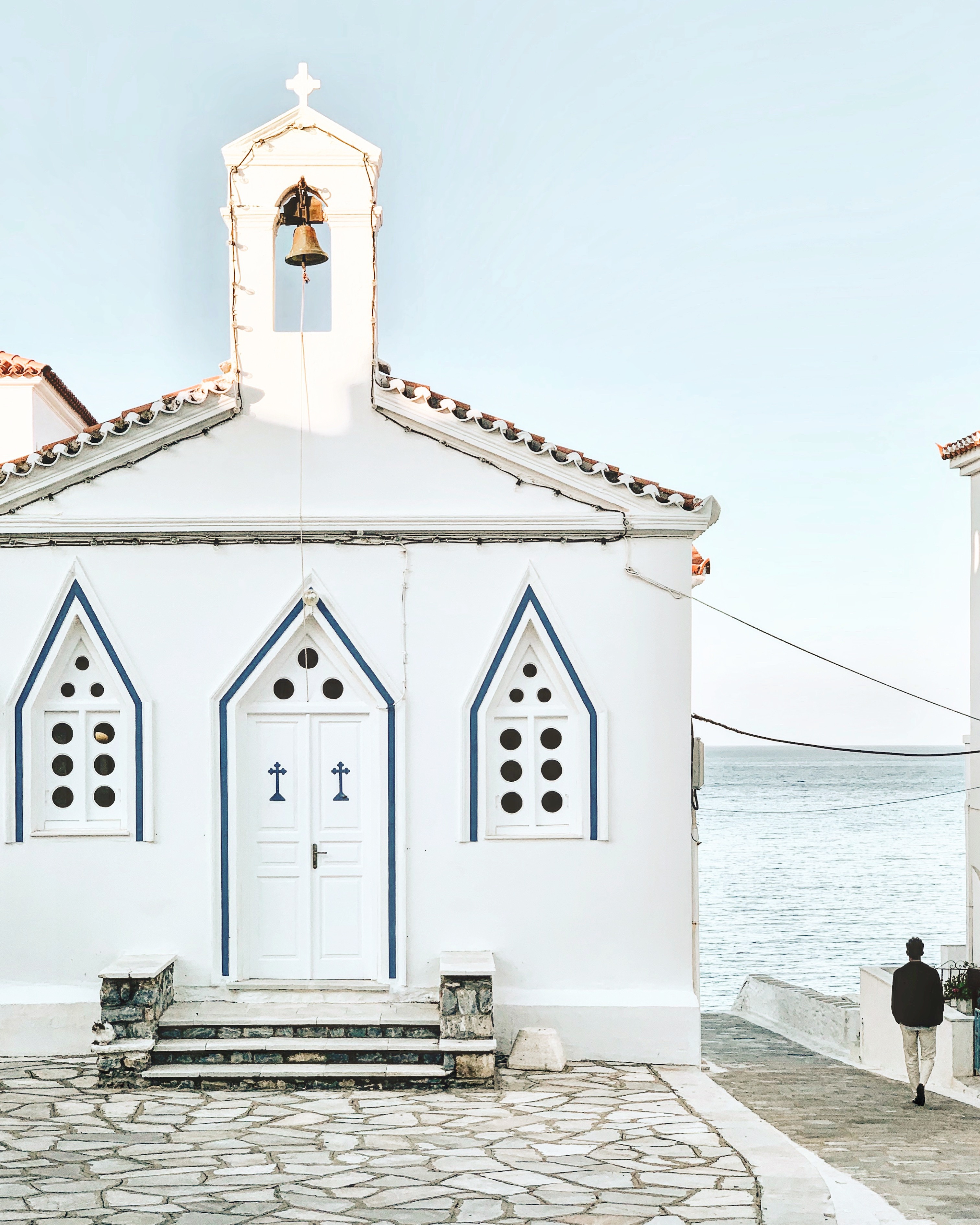 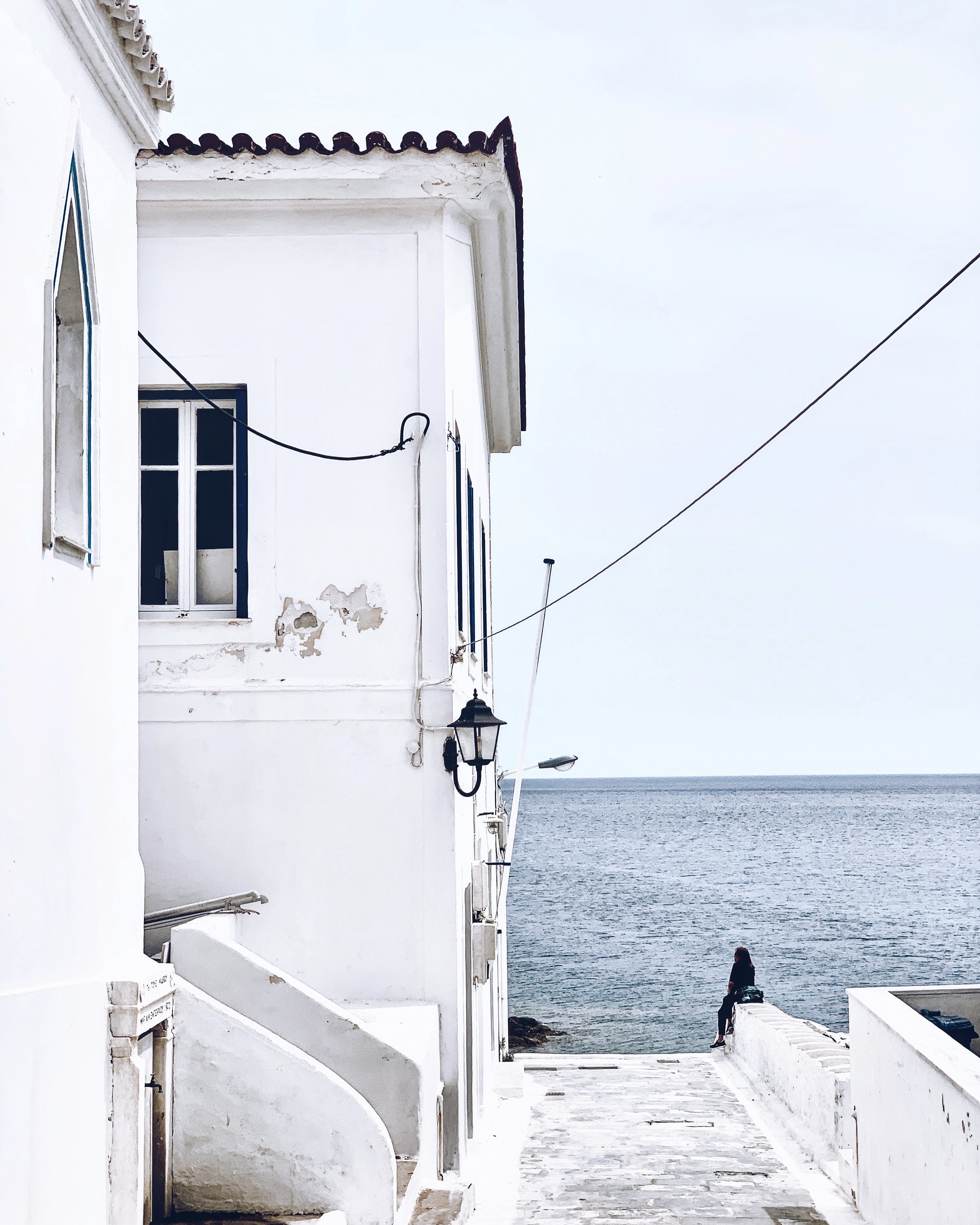 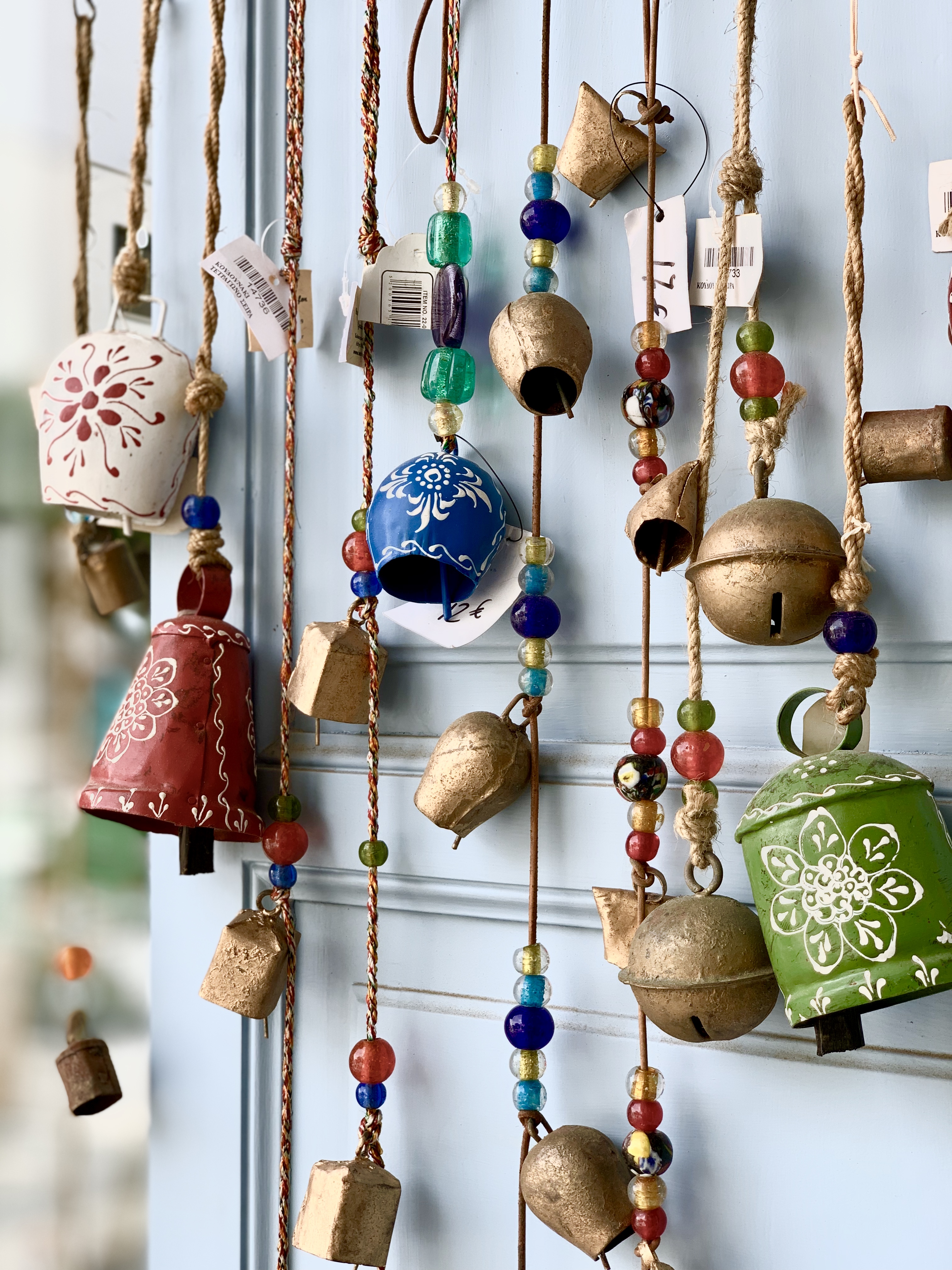 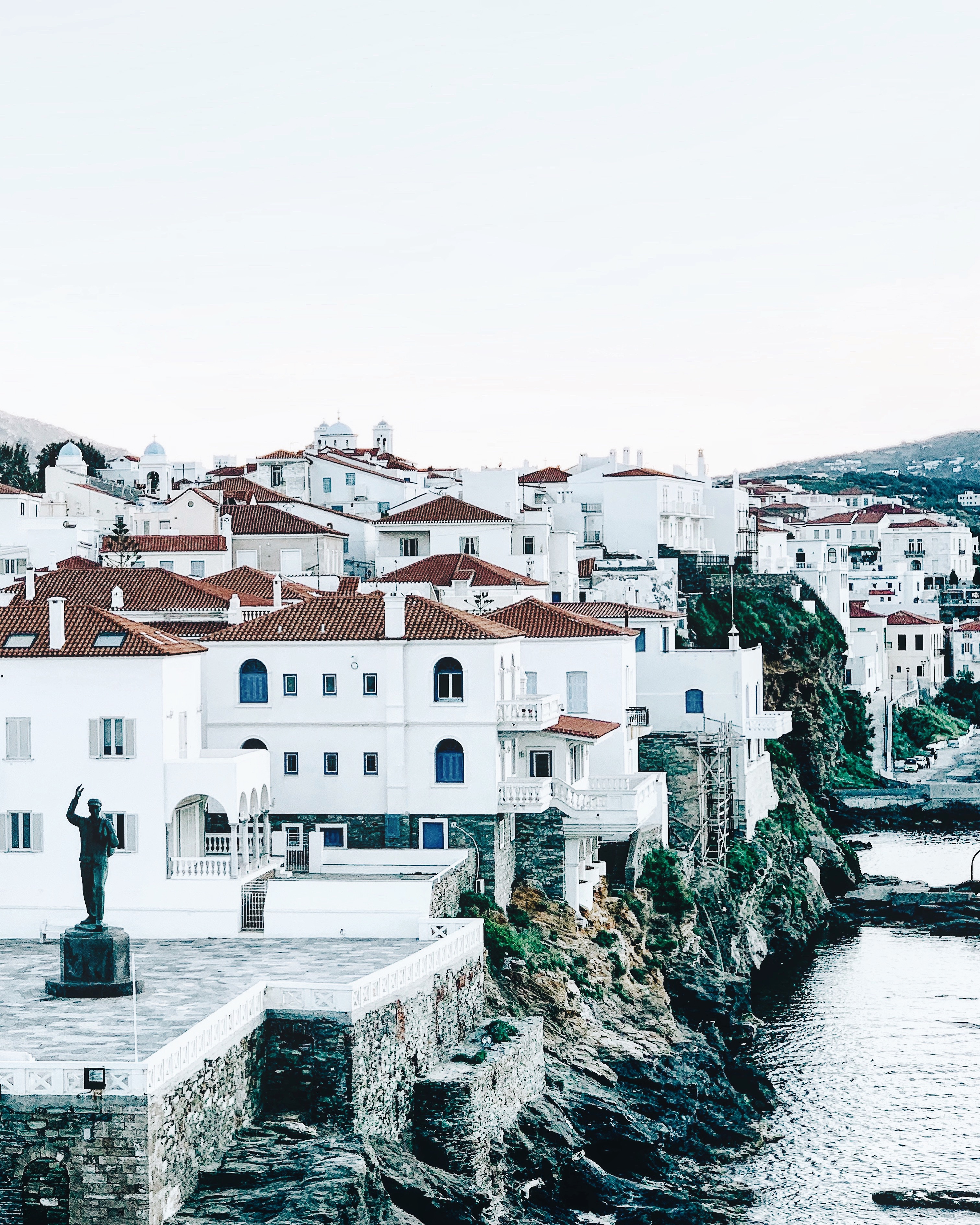 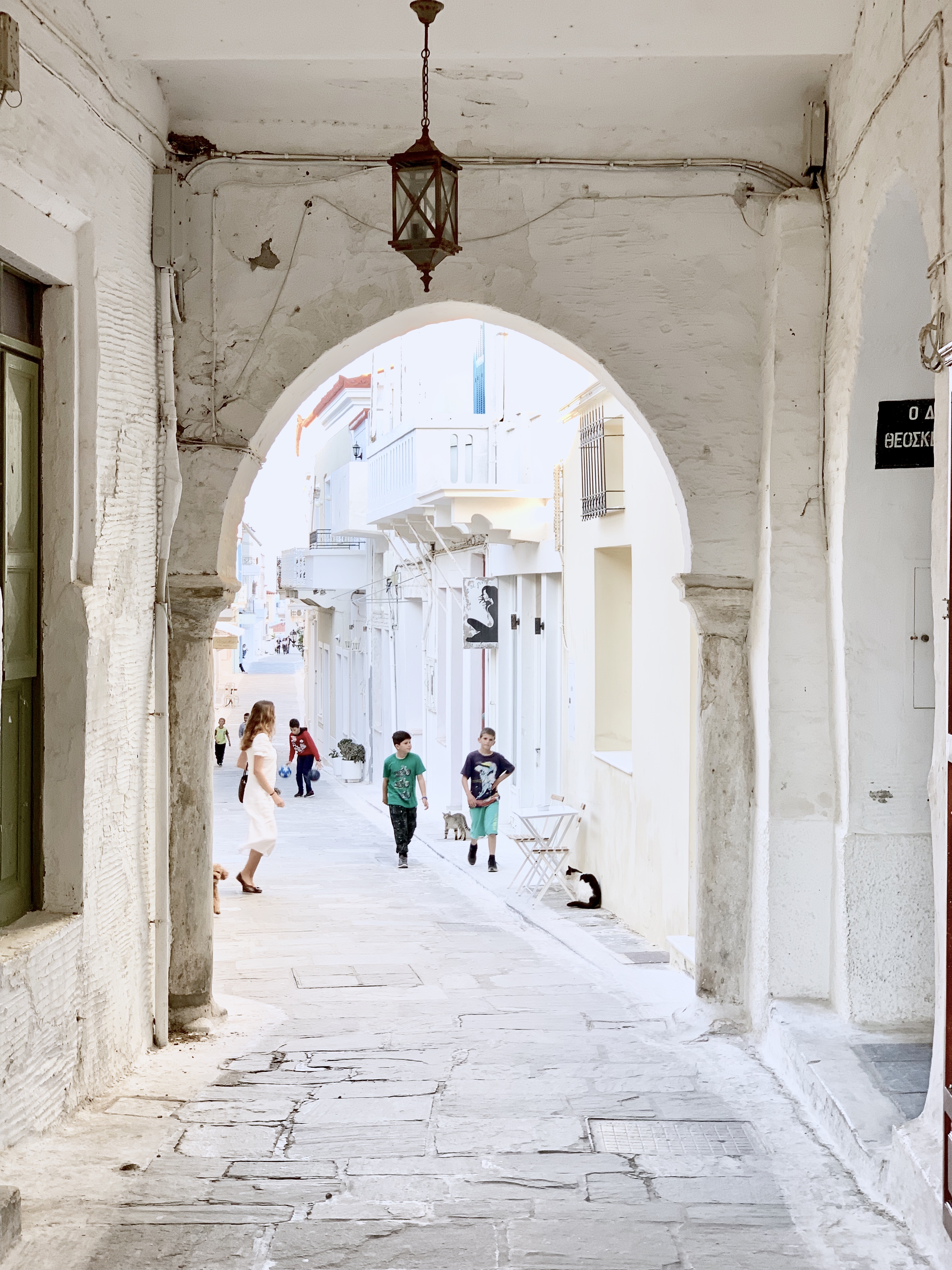 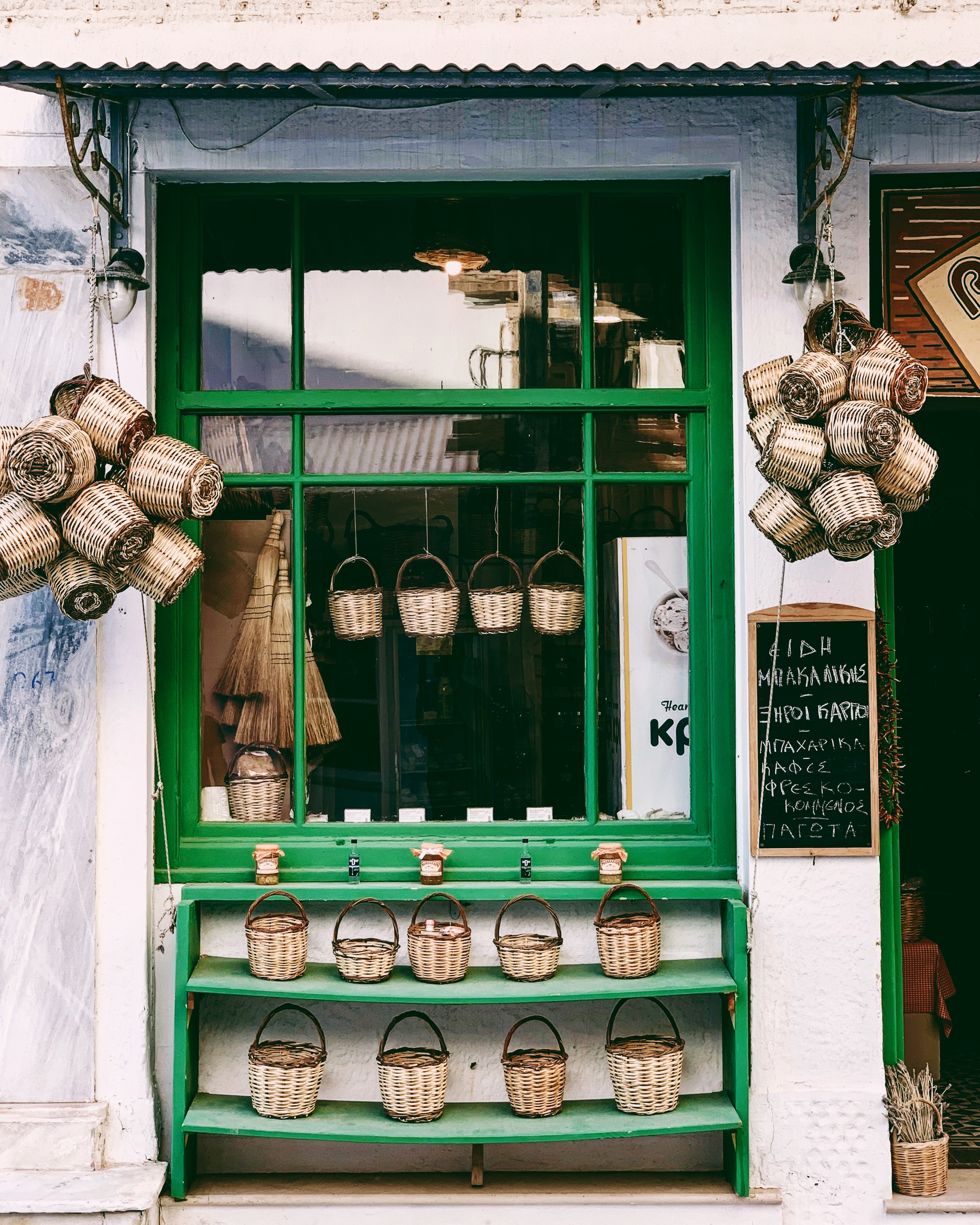 The hotel @melisses.andros is striking evidence for this. ‘’Melisses’’ in the Greek language means bees. Allegra Pomilio is the inspirator of this effort and if I didn’t know that she was born in Pescara in Italy, I would bet she was Greek. While she was talking about the island and the Greeks in general, her eyes were sparkling with love. This is probably the reason why in the ancient bay of Paleopoli in Aprovato area, a shelter of relaxation and enjoyment has been created. Carefully preserved, almost hidden in the downhill of a small mountain that leads to the sea, the view of the Aegean Sea and the historic uninhabited island Gyaros is magical. 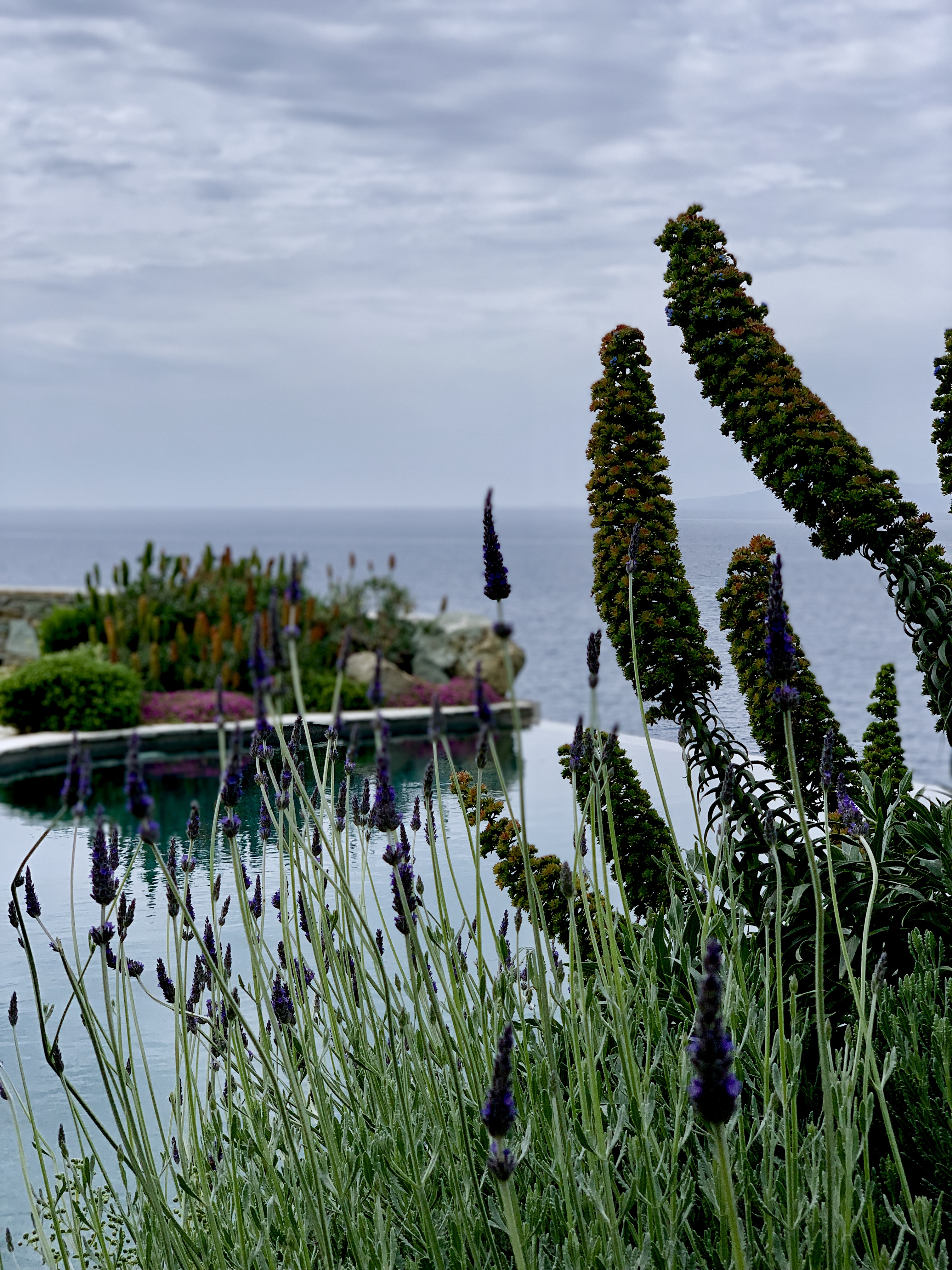 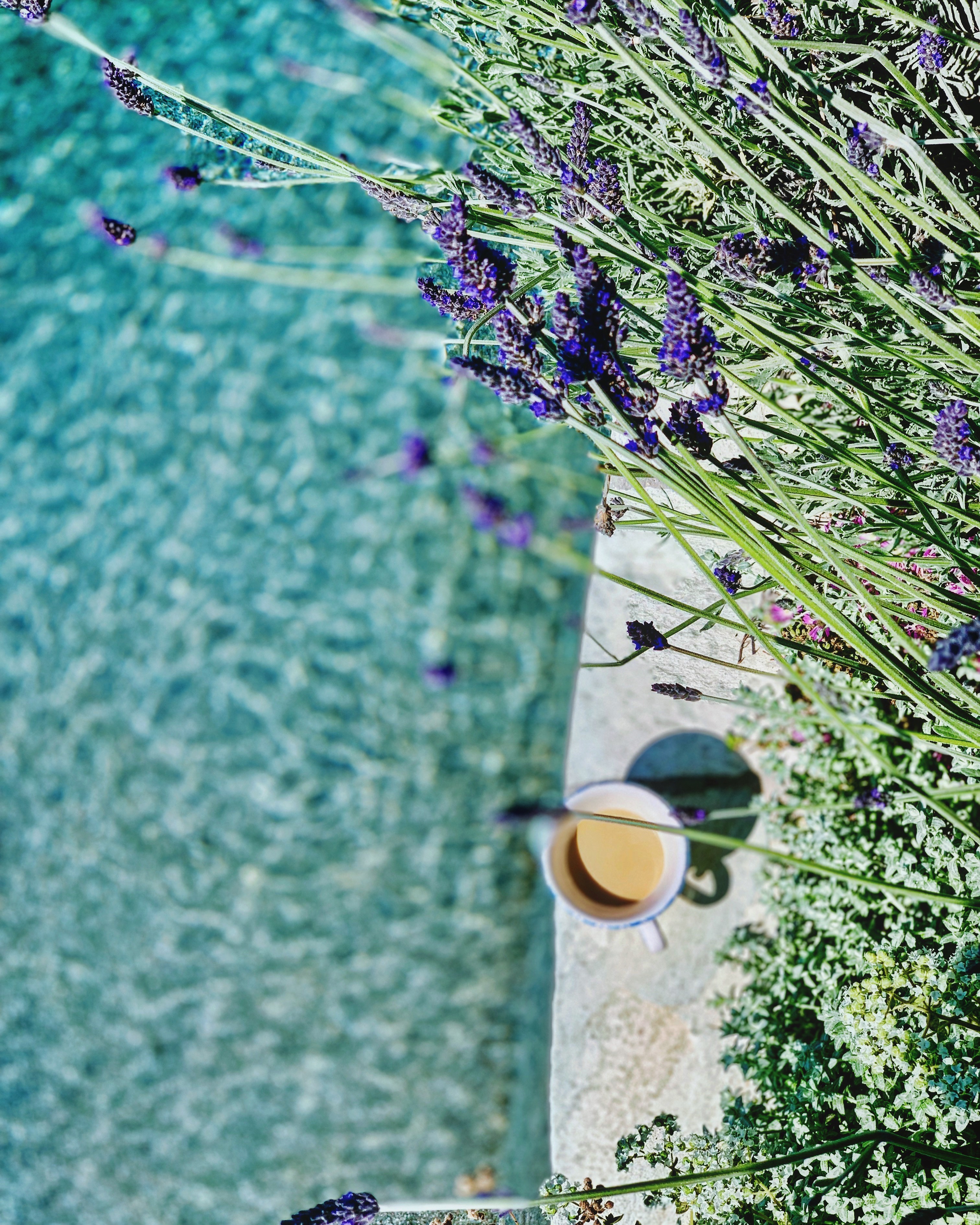 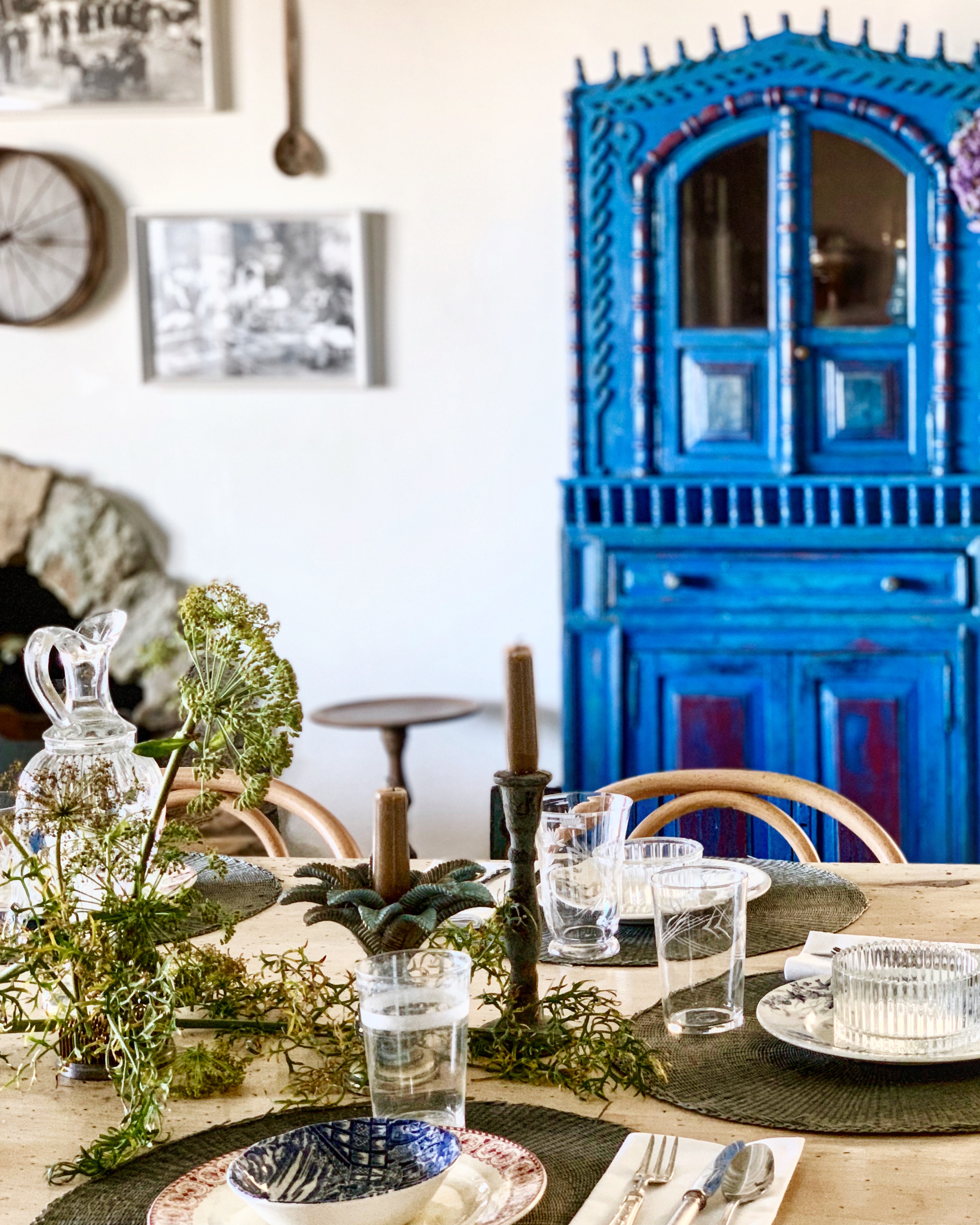 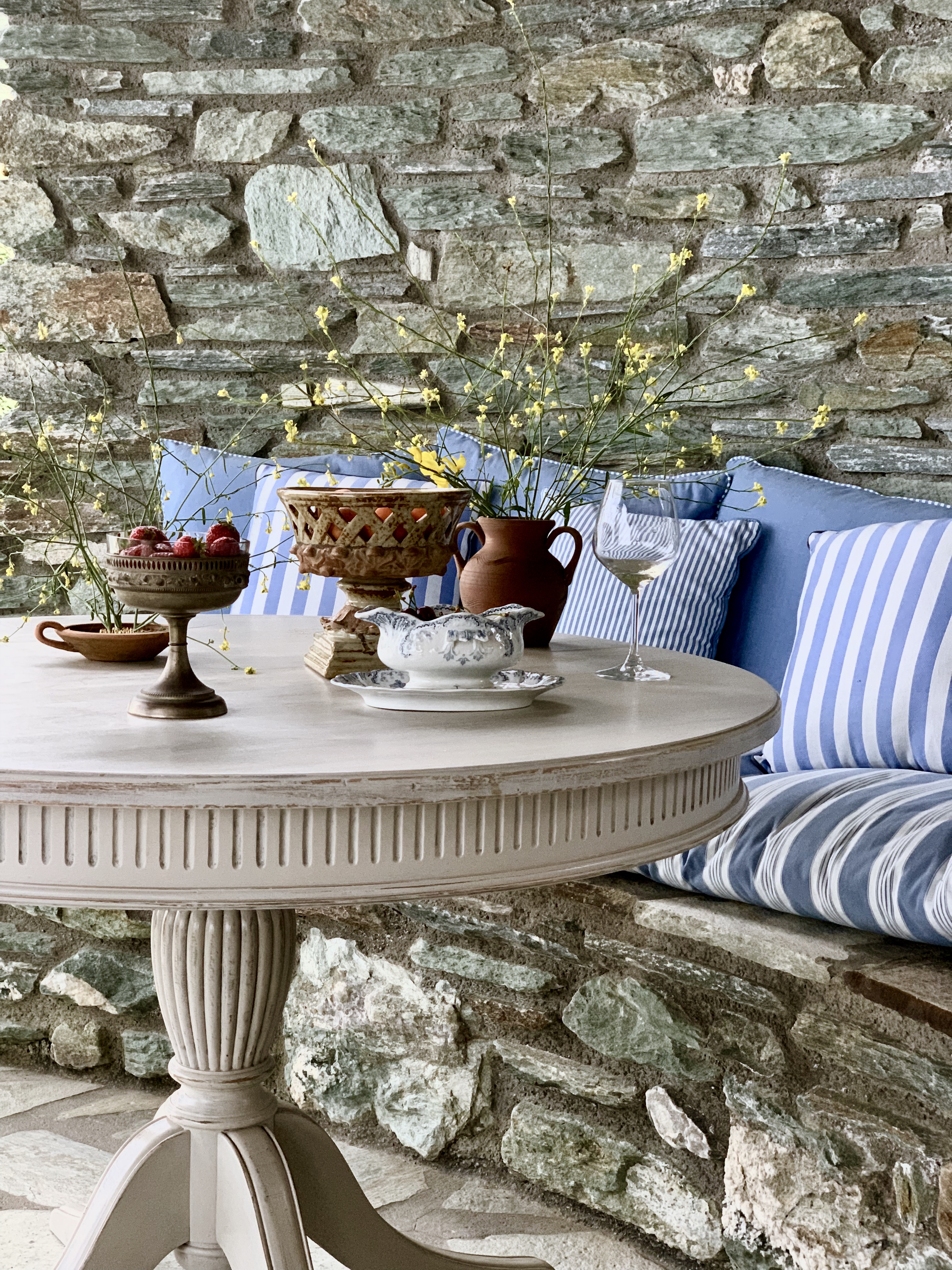 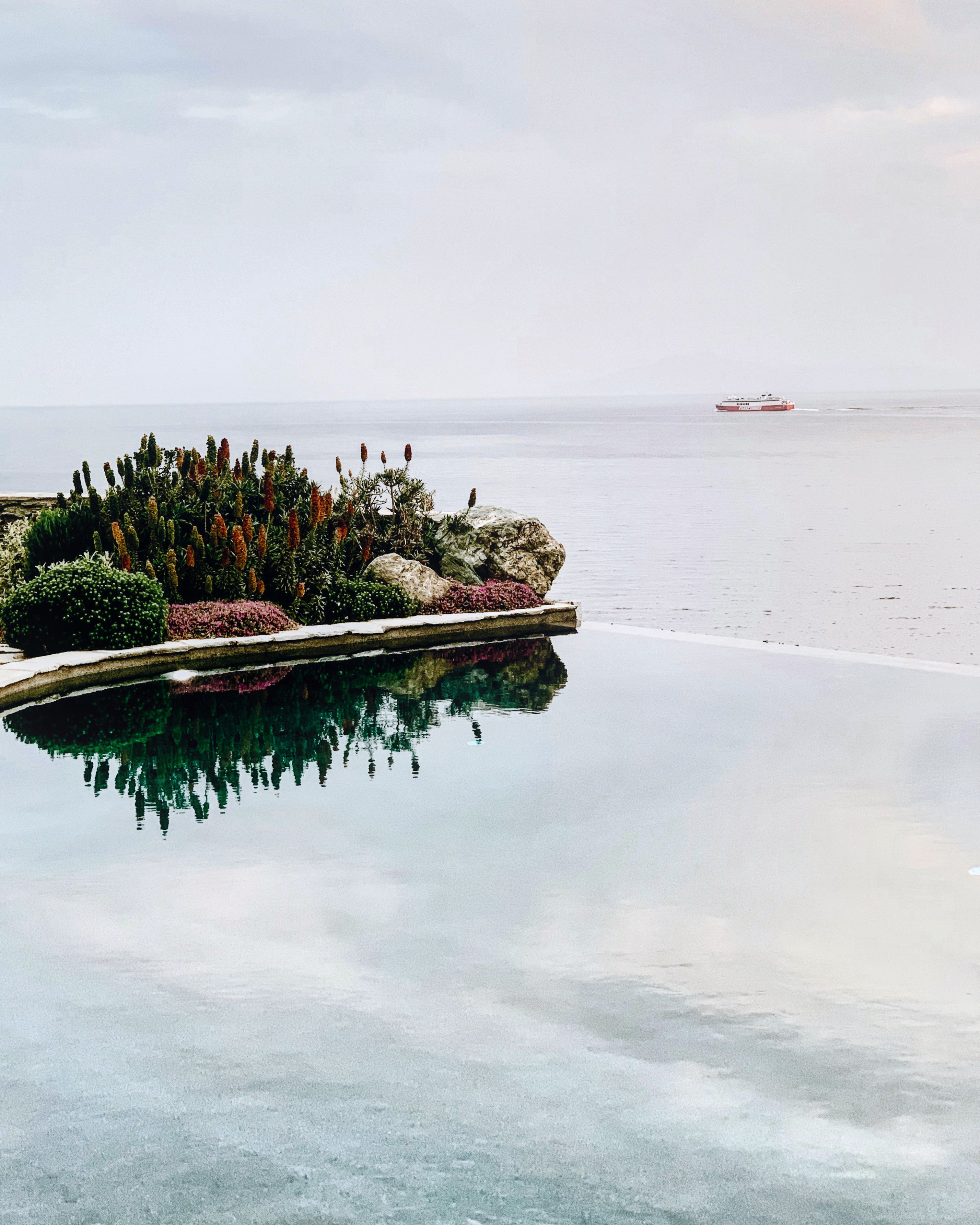 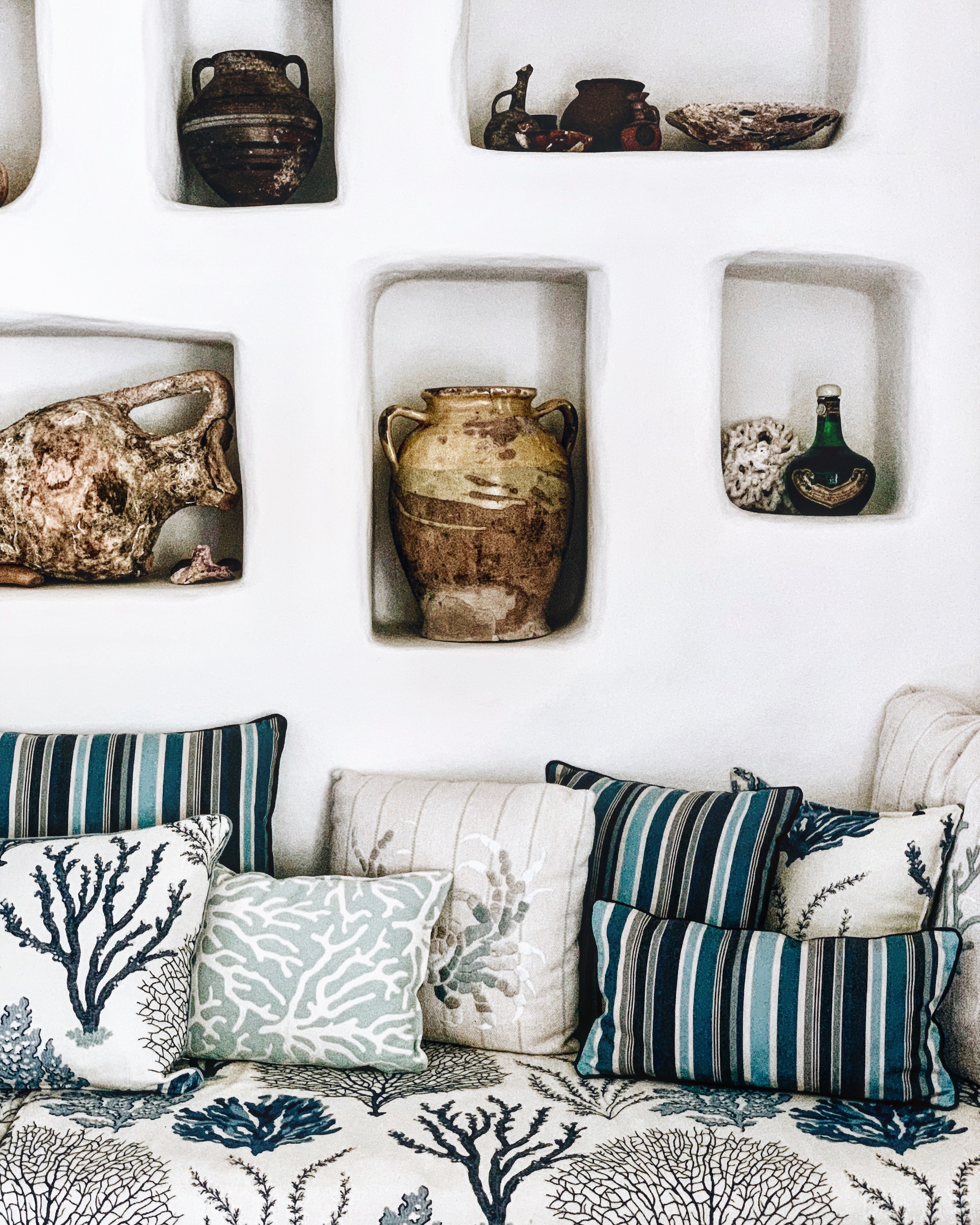 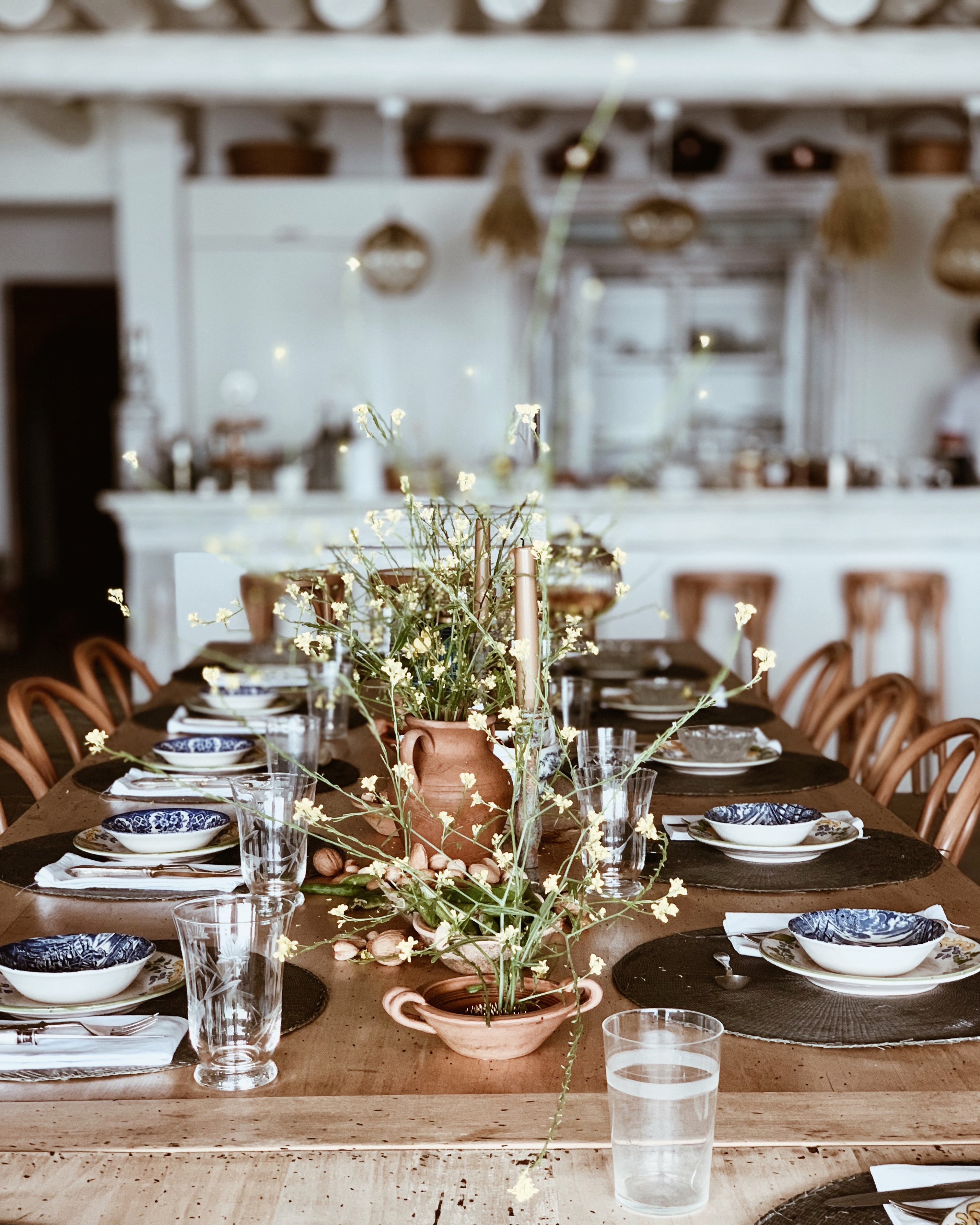 One Tuesday afternoon I met Nicole there. She was just like a little child. Barefoot, simple, with a smile on her face and full of tenderness, she was taking photos of what she believed was interesting. Right before every click, she smiled. The artistic way she was standing towards the Greek landscapes, the Greek food, the faces, the atmosphere was a significant lesson for me. I was not interested in a seminar in which a professional photographer would give advice related to lenses and metering systems. I was much more interested and curious to meet and learn about the person behind the photographer. I wanted to observe her and have a conversation with her about adventures, travels, food, relationships and of course, New York. The mean that has managed to unite us all is Instagram. The last day I revealed to her the fact that a few years ago, I had to wait for hours in waiting rooms of Swiss hospitals for the fate of two of my favorite people and her photographs on Instagram were for me a caress of relief.  For two consecutive Christmases, Nicole was with me every single day. In fact, she was the reason why I created my account. Oh yes. This trip was a ‘’big thank you’’ too.

Mid May is the peak of the Greek Spring. The flowers, the colors, the trees and shrubs were literally composing an Eden. On this feast of nature I met Taylor. @foxfodderfarm the famous florist from New York surprised me in a very pleasant way when she mentioned the Greek names of each and every one of the plants we found. Her suggestions for different combinations and new ways of presentation were taking place in the meadows. You already know how much I love taking photos of flowers and combinations. However, on the island of Andros I learned to take photos of people with flowers too. People are just like flowers. And if Taylor was a flower, she would definitely be a Greek poppy. One night we met at Chora of Andros and she was telling me about her life and her decision to leave Paris for New York. Her face was shining like the moon that was shining directly above her and there she mentioned the name of her favorite florist. The man who inspired her to start this job. We all have an idol in our lives. Taylor has a real artist. Tage Andersen in Copenhagen. 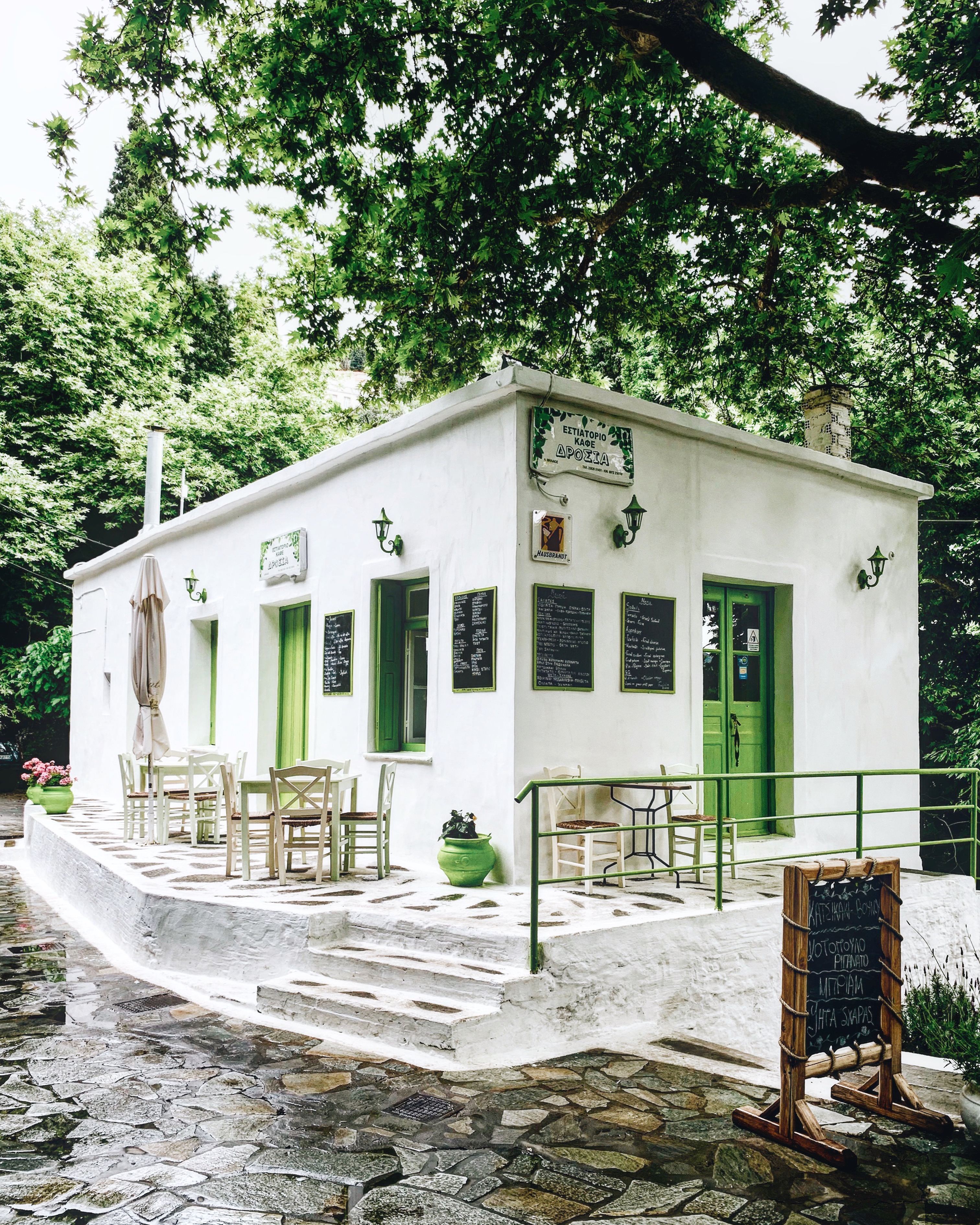 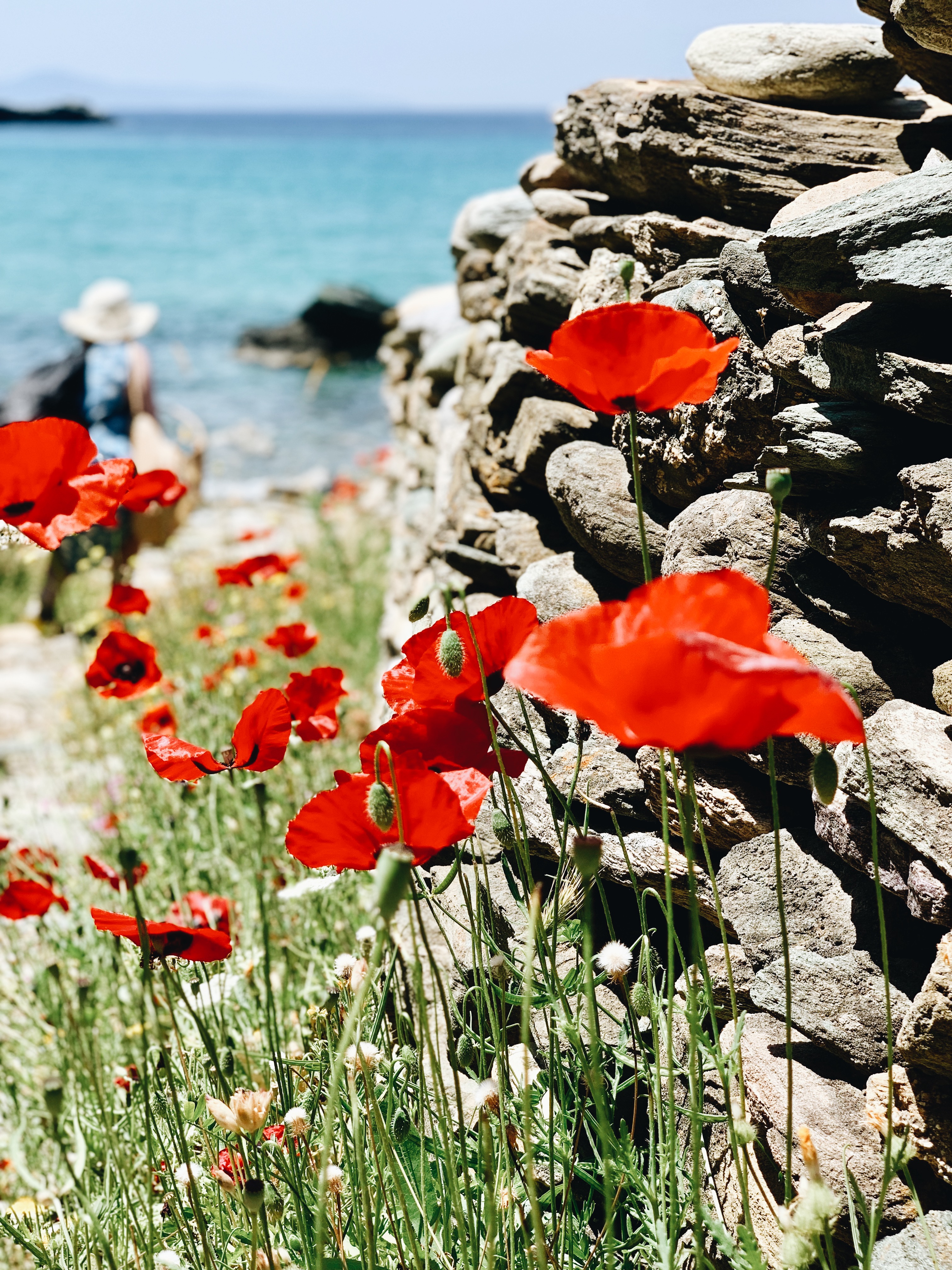 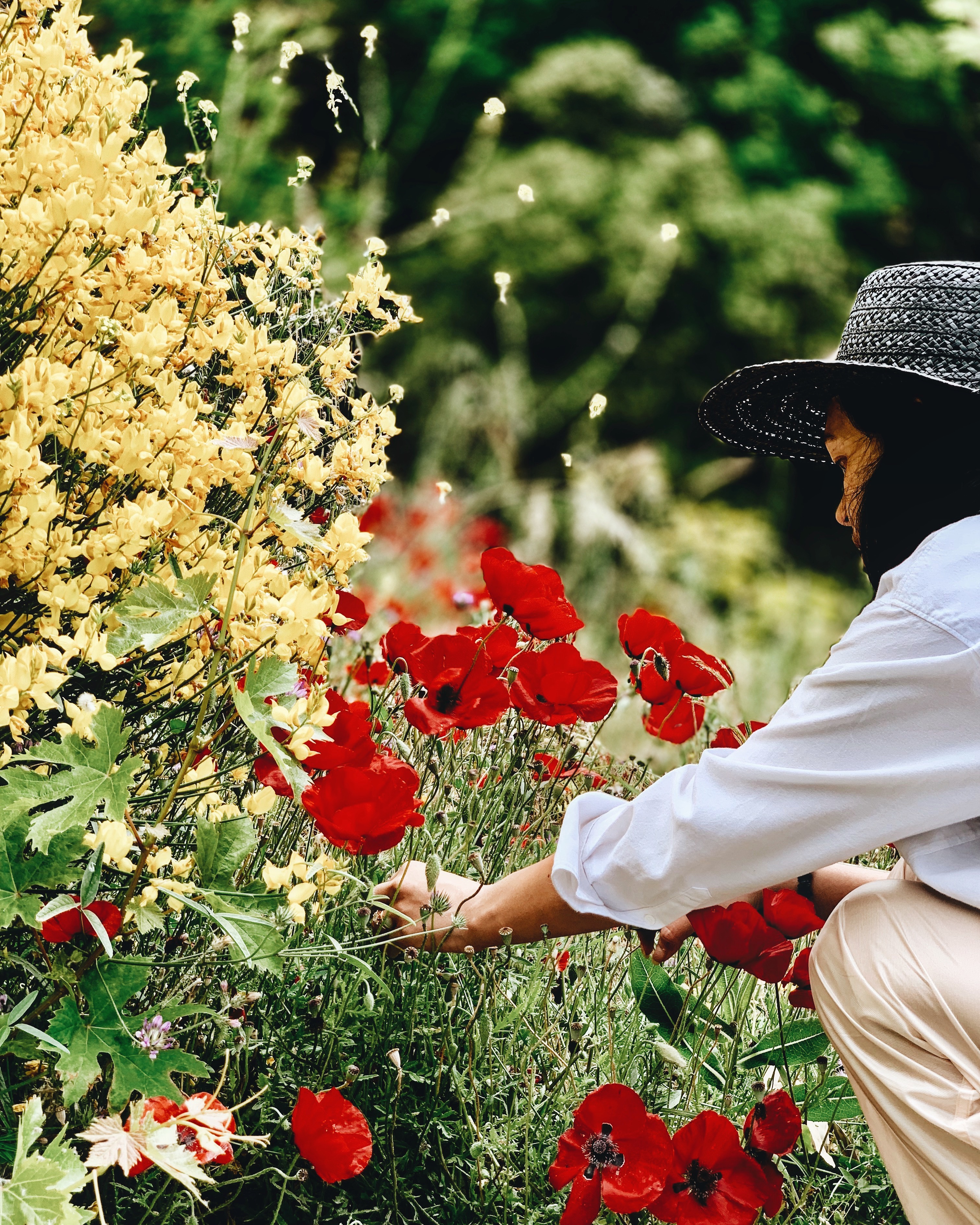 When the person who cooks for you with love and care has good knowledge of the Italian cinema, Shakespeare and keeps lists of films in a special notebook, you immediately put him in your heart. When she serves you Greek dolmades (stuffed vine leaves), better than any Greek mother has ever made, then you may fall in love with her. @letitia_ann_clark is British and lives in Sardinia. She cooked tirelessly and not only she was smiling every day, but she was also almost dancing in the back of the kitchen while cooking for 12 people. She was trying wines, decorating cakes and even spoke to the ricotta as if they were friends. In the mornings she was driving fearlessly like a real rally driver in difficult gravel roads that ended up in secret beaches with green waters whereas at night she was dressed impeccably and made uniquely delicious Mediterranean dishes that we devoured gratefully.  If I directed the film ‘’Io sono l’amore’’ I would definitely give the role of the chef Edoardo Gabbriellini to Letitia. Please watch this film. Some day I will do a special tribute. 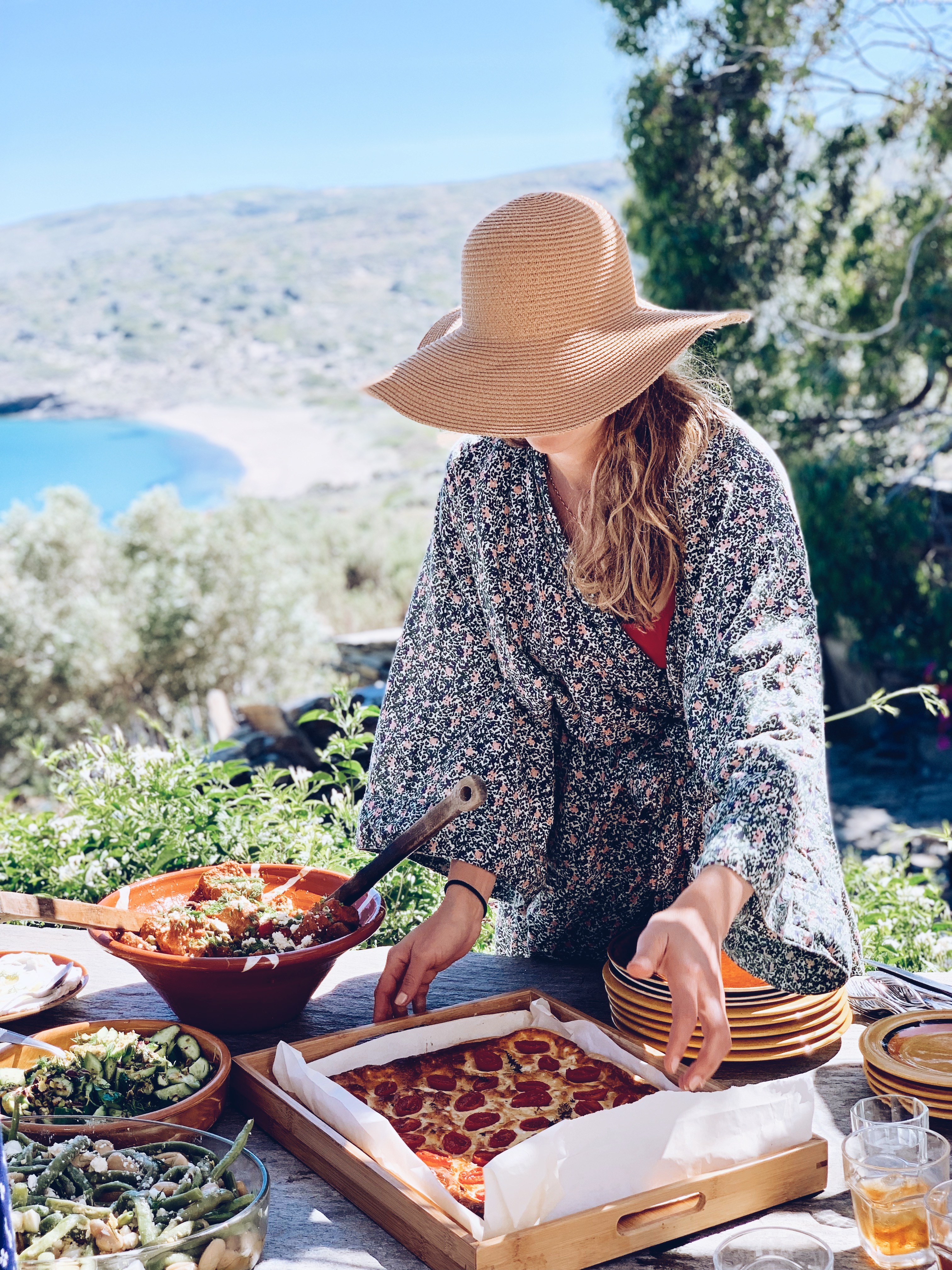 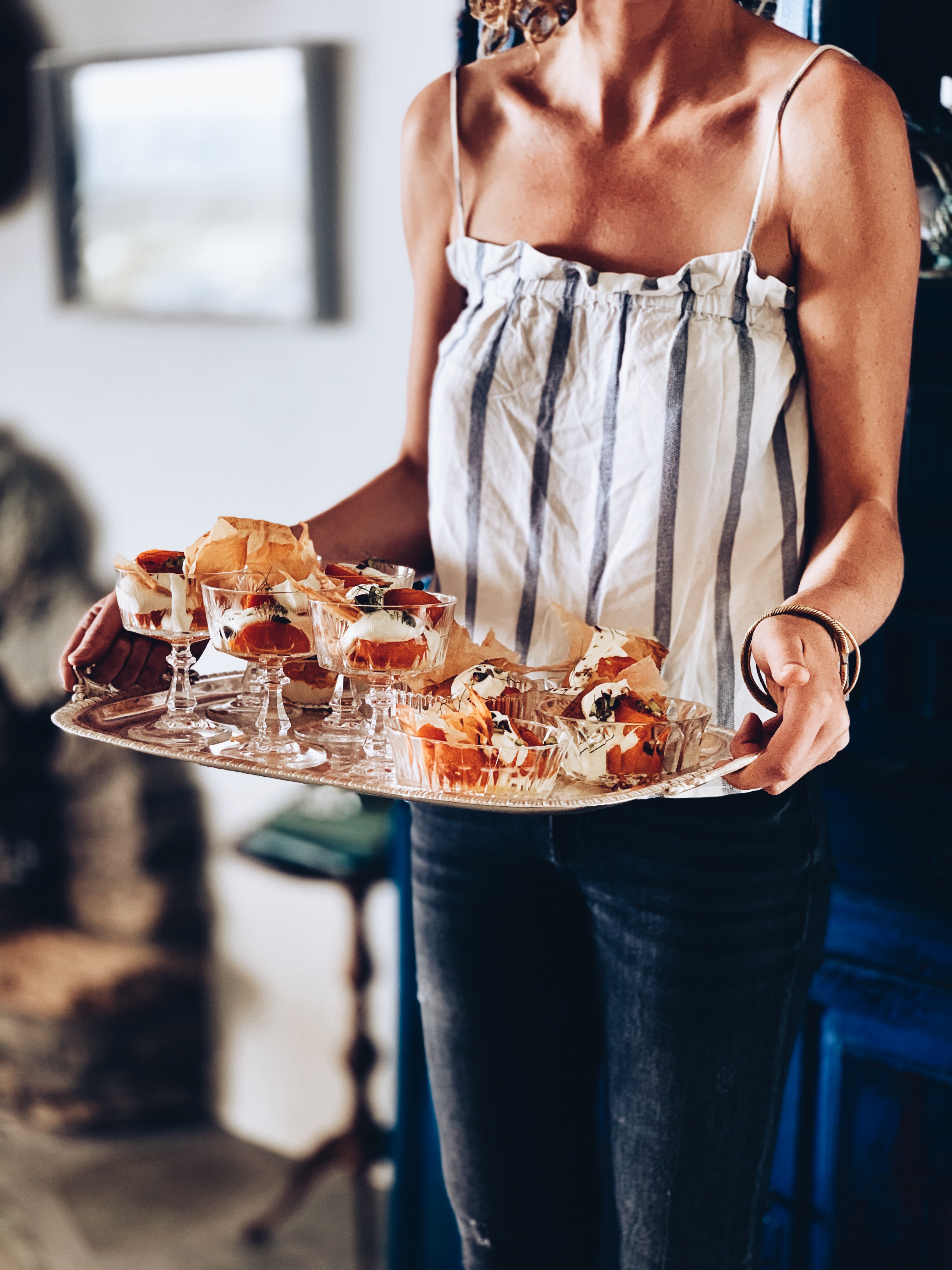 I could describe to you how to find secret beaches, I could talk to you about taverns with delicious dishes and coffeehouses that serve homemade ice cream and almond sweets, the traditional sweets of Andros (my favorite is the Laskaris patisserie, try the almond sweets but also the preserve: lemon blossom) It is equally worth mentioning my excitement for the museum of contemporary art which is literally a jewel. However, all these things are so easy for you to find by yourselves by asking any resident of the island or by searching blogs that use the same sources. I prefer to talk about real moments which have been placed in my memory as magical.

One beautiful and hot afternoon, we all gathered around the huge old table of Melisses and with the help of Letitia and Allegra we made homemade pasta. Eight Americans, one Italian, two British and two Greeks, knead, cut, play with the flour and smile. It starts raining calmly but nobody seems to care. It is almost Summer. Someone shouts: there is a rainbow! We all leave our tools and the flour and we go to the big balcony. Yes, it was the biggest rainbow I had ever seen. The one edge of the rainbow was falling over the mountain and the other one was lost in the Greek open sea. Tu Vuò Fa’ L’ Americano (the version from The Talented Mr.Ripley) was playing in the back, the Americans start dancing like crazy, the Italian girl is singing to them, the Greeks offer more wine, the rainbow, like a frame, above their heads. Happiness.

A trip with the cars on the other side of the island. @dimitriskrousis ’ old family house, is literally a balcony above the sea. The region around us is all green, without any other house in our field of view. We are in heaven. The Mediterranean dishes are waiting on the balcony table, we dive into the sea, we play with the pebbles of the beach, we read in the sun. @allipomilio with her marine mask makes a great diving and after a while returns with a hug of live sea urchins. She is smiling at us. She is not afraid of being hurt. The sun is shining towards her and we are gathering around her. Alegra is a brave girl and her hug, I swear, is not filled with thorns but with tenderness. Someone is bringing lemons and glasses with ouzo. The bottom of the sea is in our mouths. Summer is coming. Happiness. 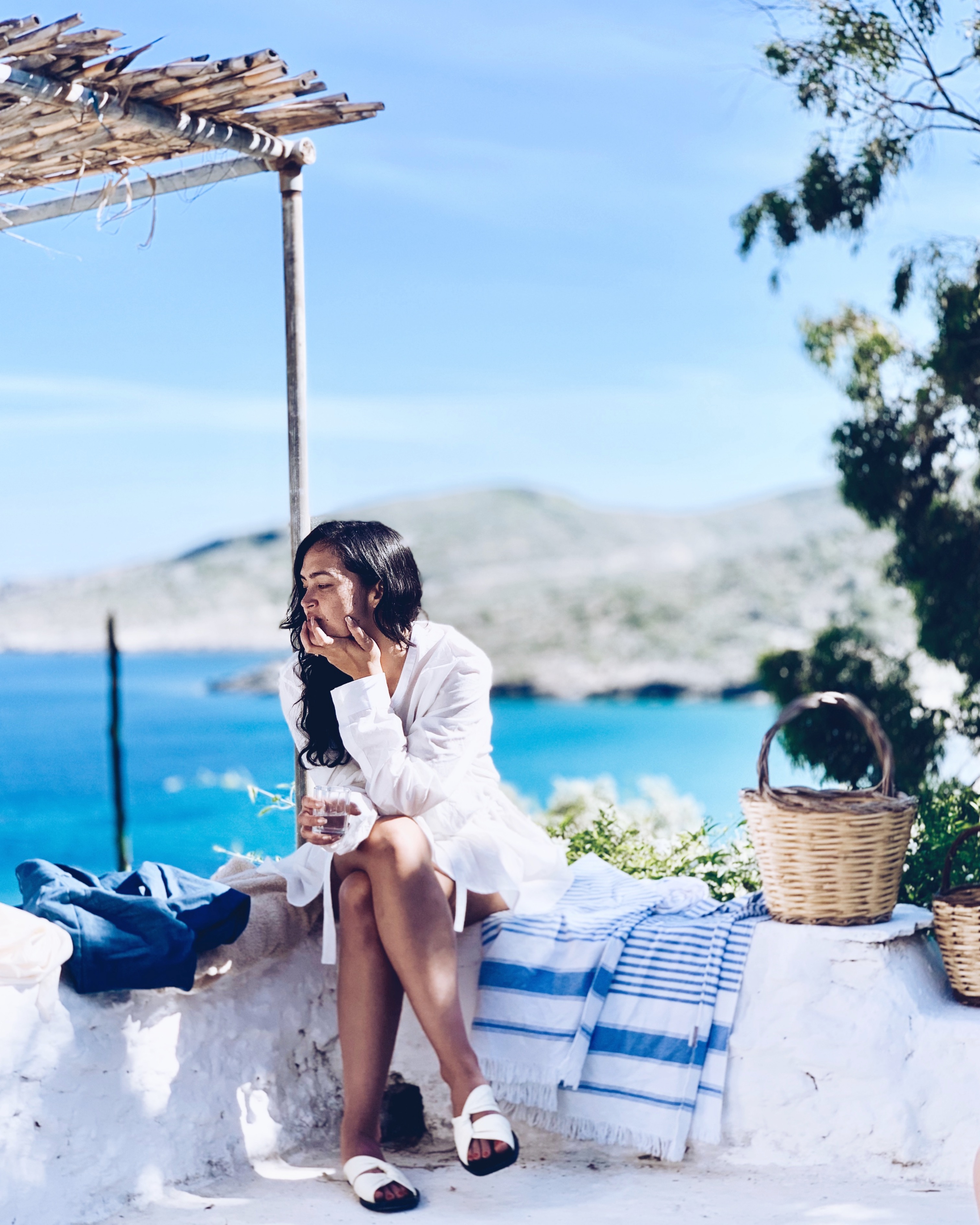 The day before the last one. Farewell dinner. Candles everywhere. Taylor’s artwork of wildflowers is hanging above our heads like a chandelier. It’s Letitia’s birthday, we surprised her with a cake and candles. She is happy, shinning. @jdeshpan Jay Deshpande is a poet, he is reading to us one of his wonderful poems. It is too powerful. @candicedukansas his wife (one of the most beautiful women I have ever seen in my life – I never stopped taking photos of her) lowers her gaze and it feels like she is sending him power. I make a thought: perhaps the poem was written for her. @rachilstollar is singing an old song, her voice is like a caress. Please search for this song, it is wonderful: Blue Bayou – Lynda Ronstadt. We have already drunk enough (favorite wine: four lakes – Kir Giannis) Dimitris is saying goodbye with a speech full of thank. He is emotional. Our eyes are filled with tears. In a few minutes, we are all dancing under the full moon. Dancing and laughing. Singing and choreographing. I feel blessed for plenty of reasons, the most essential of which is the fact that we flew like bees on this magical island. Where our hearts opened and filled with honey.